For producers of processed foods, beverages and pharmaceutical products, the safety and integrity of the product has always been a top priority. It’s always been important – and always a bit of a challenge to sleep at night. But the stakes (and headaches) are even bigger today.

Population growth, demographic changes and resource scarcity are among the megatrends ratcheting up the pressure on these companies to produce more in shorter amounts of time, with greater quality and variety, all while complying with higher standards for quality, safety and sustainability. There is less time for machine commissioning, less personnel, shorter turnover-times to change products, and higher uptime expectancies. Along with increased scrutiny from regulators, consumers are also taking notice; they’re more aware of food safety issues, more demanding in terms of reproducible quality, appearance, taste and consistency – and driving new trends in food and nutrition. How best to navigate the storm?

For producers there are a lot of factors beyond their control, but safety is not one of them.

Safety – product safety, process safety and employee safety – is an area where they can take control, make changes and lay the foundation for a strong, sustainable, future-proof business moving forward.

GEA is in the business of keeping customers ahead of the safety curve. For decades, it has been the “go-to” company whenever valves and pumps need to meet specific high-performance and hygiene criteria. Among its more recent safety innovations was the “PMO” valve, which revolutionized the US dairy market in 2007. The trick? Taking advantage of the Venturi/vacuum effect to make absolutely sure liquids do not mix under any process conditions. GEA’s Soenke Burmester, Senior Product Sales Manager Hygienic Valves, talks about the impact this had. “US regulators had traditionally required milk producers to stop production on a daily basis to conduct cleaning, since valve technology could not rule out a mixing of product with cleaner during the cleaning process. But once the FDA approved our PMO valve, US producers were able to operate 24/7.” This ‘belt and suspenders’ approach to minimizing risk remains the most stringent milk processing standard worldwide. As Burmester points out, however, current trends suggest that this maximum standard will soon apply in other countries and industries as well. “The hygiene requirements are getting tougher – for conventional products as well as for alternative ‘new food’ products,” he says.

To stay out ahead of these developments, GEA is now offering customers another safety and performance boost with its new VARIVENT® Mixproof valve type MX. Released in February 2022, GEA’s next-gen MX valve is for producers who want another level of safety for their milk, food, beverage and pharmaceutical products. The MX ensures protection of sensitive products against contamination and process disruptions even in extraordinarily demanding situations. “To provide complete protection even in these exceptional situations, GEA relies on an optimized geometry of the leakage chamber in the MX valve type,” explains Burmester. “We have physics on our side which human intervention cannot fool: a special shape of the flow channels creates a vacuum whose suction immediately discharges any leakage that occurs to the outside. Tests have proven that this technology would prevent mixing even without seals in place.” With double-balanced valve discs, the MX ensures also maximum protection against the risk of pressure surges and other overpressure situations during operation.

“Some might ask: ‘Why should I invest in a new valve infrastructure when the current one is fine?’ And that’s a reasonable question. But can you have too much safety?”– Soenke Burmester, Senior Product Sales Manager, Hygienic Valve Technology

“Things are moving so fast; if something is considered best practice today, you can bet it will be standard, if not mandatory, tomorrow,” says Burmester. “This MX technology is our answer to the challenges faced by producers today – a way to put their mind at ease, to know that they can assure the purity of their products, meet the highest safety requirements and be prepared for higher standards in the future, including more hygienic design requirements. And for global companies, the MX offers a way to obtain approval for their processes worldwide.”

The VARIVENT® MX valve is just one of the recent product innovations as part of GEA’s safety “offensive”. Bernd Porath, Product Manager for Valve Automation and GEA’s expert on control tops, talks about how the T.VIS tops help today’s customers stay ahead of the curve. “On the one hand today we see increased digitalization and process automation helping producers save time and increase productivity, even with reduced personnel,” says Porath. “But the flip side is that machines are being pushed to the limit and are more vulnerable to breakdown.” As Porath points out, this makes it all the more important to get the commissioning exactly right so these unmanned systems run smoothly and safely. “In the past, there were teams of engineers deployed to commission systems, to adjust all the settings and conduct tests, but there’s no time for that today,” says Porath. “So we consider it our job to deliver solutions that make the commissioning of valves easier and safer – and life easier for operators. Furthermore we offer modern IO-Link system control, so users can ensure digital integration in Industry 4.0 environments at an early stage.”

Our premium control top T.VIS A-15 enables full integration into advanced automation concepts and IO-Link systems. “With IO-Link, you have intelligent sensors and actuators optimizing process performance and enabling a whole new level of plant safety and efficiency,” explains Porath. “These are automated process adjustments, including real-time analysis and adjustment of process functions in the PLC.” Other advantages of IO-Link include centralized control and monitoring of all valve operations as well as advanced diagnosis and visualization options in the PLC, which allow operators to anticipate situations before they escalate. “This responds to the growing demand among manufacturers for connectivity, handling and process diagnostics across their entire production lines,” says Porath.

“We’re starting to make the ‘valve of the future’ a reality, making it possible for valves to communicate with the latest communication systems. Already today we can access information on the position of the valve stem and valve performance – a valuable tool for optimizing processes.”– Bernd Porath, Senior Product Manager, Valve Automation

The third member of GEA’s groundbreaking safety trio is its Lockout-Tagout (LoTo) solution – mechanical or pneumatic locks to help plant operators protect their workforce from hazards during maintenance and repair work. With the product release in October 2021, GEA became the first valve manufacturer to develop LoTo locks for its entire hygienic and aseptic valve technology range. The solution lets operators secure individual valves or entire valve clusters, allowing them to isolate specific working areas from energy sources and conduct repairs safely even during ongoing operation.

The safety mindset is not a conservative mindset; it’s forward-thinking, especially in today’s environment.

Lisa Schmidt, Product Sales Manager at GEA for Hygienic Valve Technology, has seen customers sharpen their focus on employee safety over the last several years, with more and more companies implementing stricter occupational safety measures in their plants, including zero-accident policies. “In 2017, a longtime customer and one of the world’s leading food companies approached us about a solution for locking their GEA valves, and shortly thereafter we had similar requests from other customers in Europe, the US and Canada,” recalls Schmidt. Although lockout solutions were available on the market at the time, they were not compatible with all GEA valves, which is why Schmidt and her colleagues got to work developing a solution for all valve types. “Our goal was a shut-off concept that was simple, workable and highly compatible, i.e. could protect all the valve technology company-wide and ensure compatibility with future valves,” she says. “One thing was clear from the start: we could only provide the reliability and flexibility our customers need for accident prevention by developing a complete system.” Today, GEA offers a complete LoTo portfolio for each of its valve types, with different ways of locking them.

“There is a lot of interest from our customers in addressing safety risks with new technical solutions like these,” explains Schmidt. “After all, if you don’t have accidents, you don’t have downtime; if you can do maintenance as quickly and safely as possible, you can get back to production. And they know the importance of having a reputation as a safe, responsible employer. Whether it's product safety to protect consumers or accident prevention to protect employees, these companies are clear: you can't be too well prepared for the unexpected.”

If you’re a plant operator in today’s complex, ever-changing environment, can you be too safe? Too well prepared? For GEA valve experts Burmester, Porath and Schmidt, the answer is no. In today’s environment, safety means security, but it also means opportunity.

“We have valves and control tops in the field operating and serving our customers for 30 years or more,” says Porath. “If the world wasn’t changing so fast, I would say: keep using it for another 30! But we need to be asking: Is that old valve efficient enough? Is it reliable? Does it maximize performance and safety? And customers understand this – that upgrading is a necessity today.”

Indeed, with “Industry 4.0”-capable production lines rapidly becoming the new standard, plant operators have little choice but to leverage the power of IoT and data to enhance their detection and communication systems. “And that goes for valves, too,” says Porath. “Upgrading to responsive valve control tops gets the production line online, which is a necessary step because we’re moving more and more in the direction of predictive maintenance.” For Porath, predictive maintenance is not just about detecting problems early and streamlining maintenance; it’s about optimizing performance and sustainability. “We are constantly updating our software to open up new possibilities – already working on new features for the T.VIS, for example, such as smartphone-based functionality for energy optimization.” As Porath explains, he and his team want to capture additional functions within the valve range to show how digital control tops – with sophisticated automated functions and feedback options – can contribute to an improved climate footprint.

The future promises plenty of change and challenge on the product safety front as well. “Producers face the real possibility of new regulatory requirements for traceability and proof of hygienic evidence, for example, or the introduction of more stringent sanitary standards, such as the 3-A standard in the US,” says Burmester. “We’re helping customers get ahead of the curve in terms of regulatory changes, but also in terms of food changes. The ‘new foods’ – plant-based, insect-based even cell-based food alternatives – are bound to be more demanding, not less.”

“To produce the food of the future we need a factory of the future,” says Schmidt. “And that’s really what we’re aiming for with these latest safety innovations.” 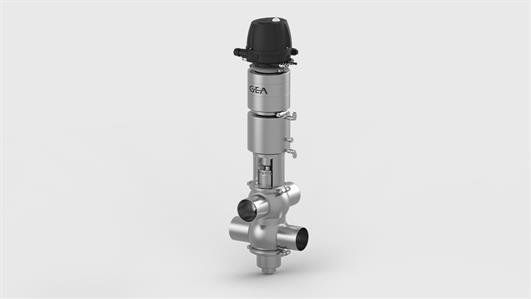 GEA’s VARIVENT®MX valve is for producers who want another level of safety for their milk, food, beverage and pharmaceutical products. The MX ensures protection of sensitive products against contamination and process disruptions even in extraordinarily demanding situations.

Applying physics which human intervention cannot fool, GEA uses a special shape of the flow channels creating a vacuum whose suction immediately discharges any leakage that occurs to the outside. Since new plants today are increasingly commissioned under time constraints, raising the risk of pressure surges during operation, the double-balanced valve discs are designed to keep the valve stable even in the event of water hammer. At the same time, it retains its full ability to act even in the case of thermal expansion of the medium.