In 1874, two brothers, Sebastian and Heinrich Huppmann, opened a blacksmith’s shop, which included a locksmith’s, boiler and coppersmith's shop near Kitzingen, in the Franconian region of northern Bavaria. An area ideal for growing malting barley and with a very long and rich beer brewing history, even today, the region of Upper Franconia boasts the highest density of breweries per capita in the world. One can only speculate that this rich business opportunity did not go unnoticed by the Huppmann brothers, who five years later, in 1879, incorporated brewery equipment into their production. From then on, it was no looking back for Huppmann.

Huppmann was – and still is today as part of GEA Brewery Systems – widely known for its brewhouse expertise and competency in complete processing for the brewing block for both large-scale and craft brewers. Within this area, Huppmann developed an outstanding reputation for its milling and lautering technologies, exemplified today in products like the GEA MILLSTAR® – first developed by Huppmann – and the GEA LAUTERSTAR® for mash separation and intelligent control technologies for efficient Multifunctional Lautering Management. 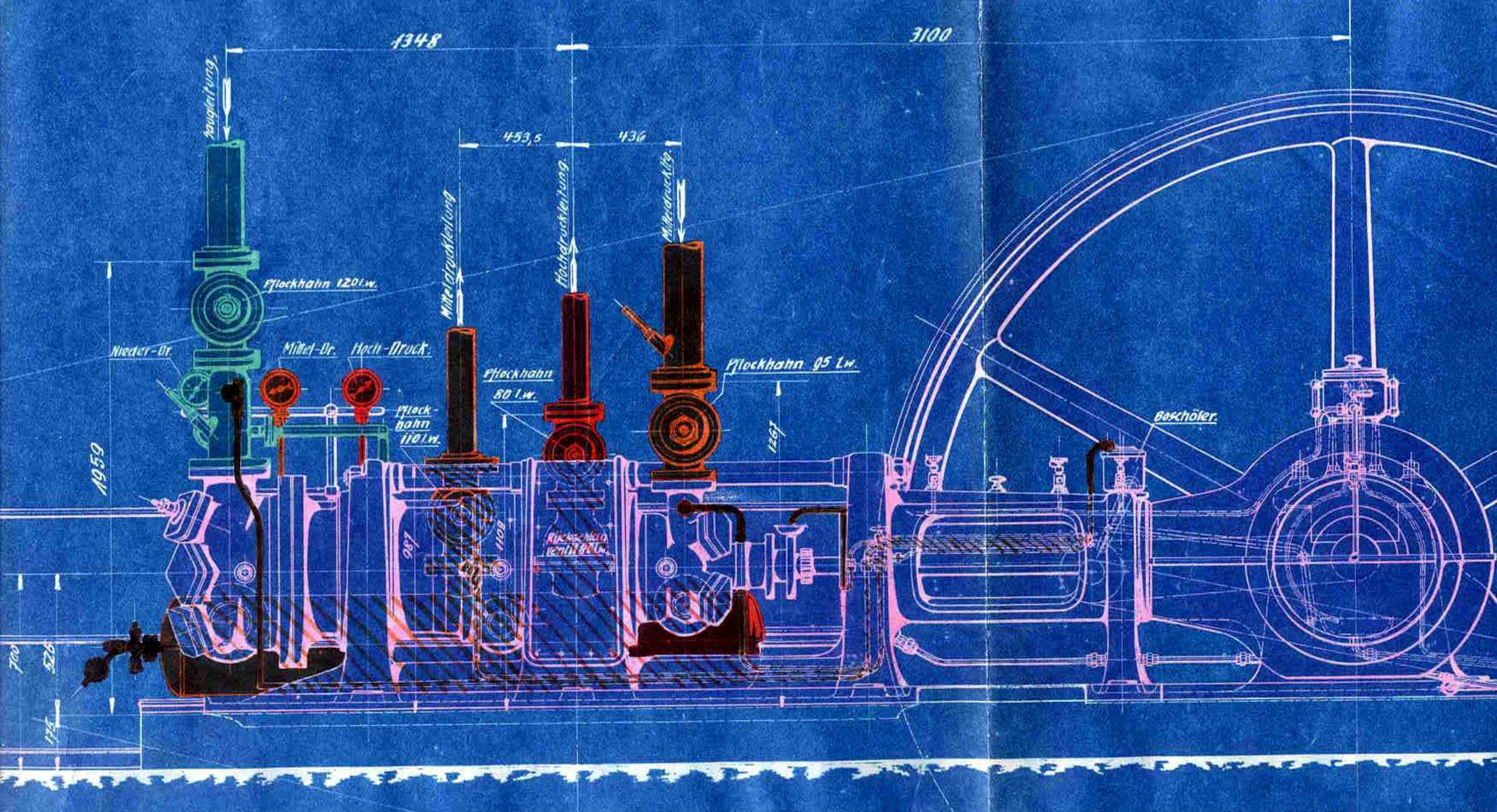 Technical drawing for Huppmann piston compressor, 1923, part of Huppmann’s utilities offering for brewing customers. By the mid-1980s, Huppmann ended its own compressor production, choosing instead to partner with GEA Grasso.

Historically, Huppmann also had strong refrigeration competency and its own compressor production. Combined with these, it was able to leverage its CO2, energy recovery and control technologies and even financing options, to offer customers turnkey brewing plants from a single hand. Although Huppmann ended its own compressor production by the mid-1980s, choosing instead to partner with GEA Grasso, its one-stop shop offering allowed the company to flex its muscles in the brewing industry. Ultimately, it was Huppmann’s ability to minimize the complexity and interfaces for customers building new breweries, as well as push down their operational costs and environmental footprint, which allowed it to achieve its leading position.

From Thailand, the U.S., the Czech Republic and Sweden – and nearly every country and region in between – Huppmann’s reputation for quality was, and still is, widely respected in the brewing industry. Of the 550 compressors Huppmann built, an estimated 200 are still in use – even after several decades of use. And with brewery and coppersmithing expertise dating back to the early 1870s, it’s not surprising that Huppmann brewhouses, including the copper kettles, are still taking pride of place in breweries around the world, although most have long-since been lined with stainless steel. 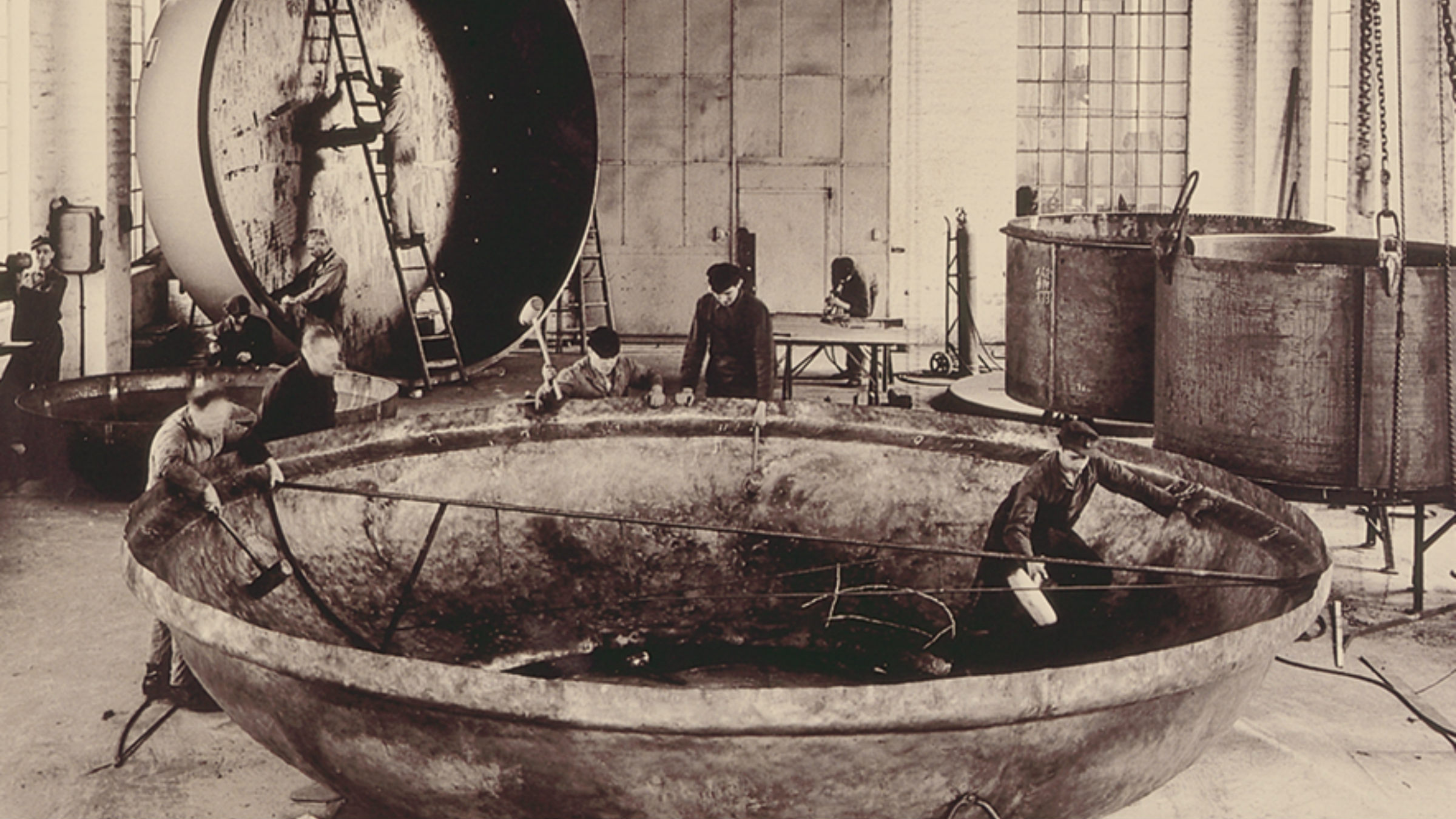 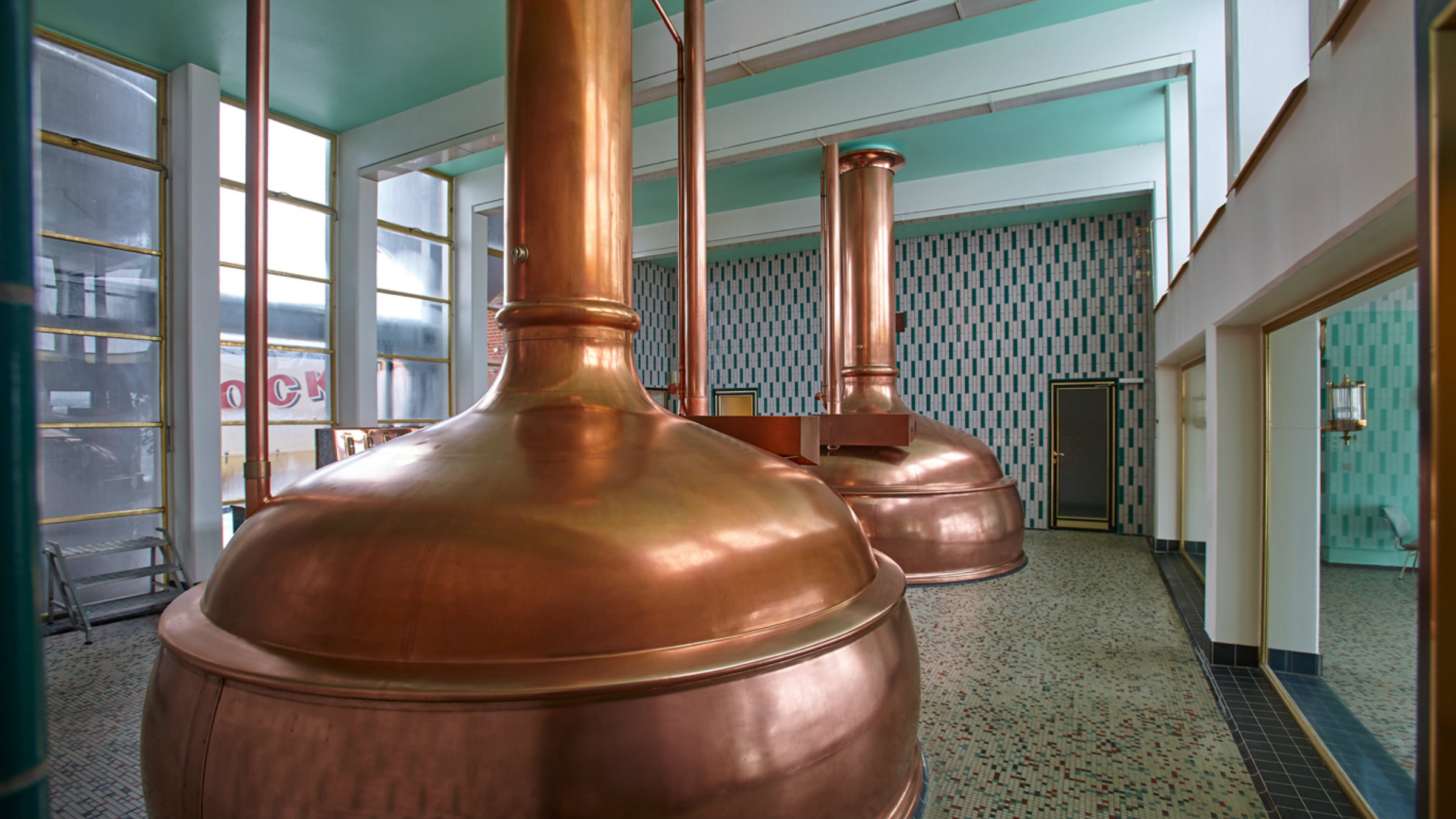 Copper kettles in the Hancock Brewery (Hancock Bryggerierne), built by Huppmann in 1962 and still in use today, Skive, Denmark.

Hancock Brewery (Hancock Bryggerierne) in Denmark continues to rely on its Huppmann brewhouse, including its two copper kettles which were constructed in 1962 and still operate around the clock as initially designed – 5 days a week. The Hancock brewery was fully automized by Huppmann in 1999, however the copper vessels received no major modifications. A gleaming copper Huppmann control panel, state-of-the-art in its day, can still be seen in the corner of the brewhouse, providing a stark contrast to the digital technologies in place now. 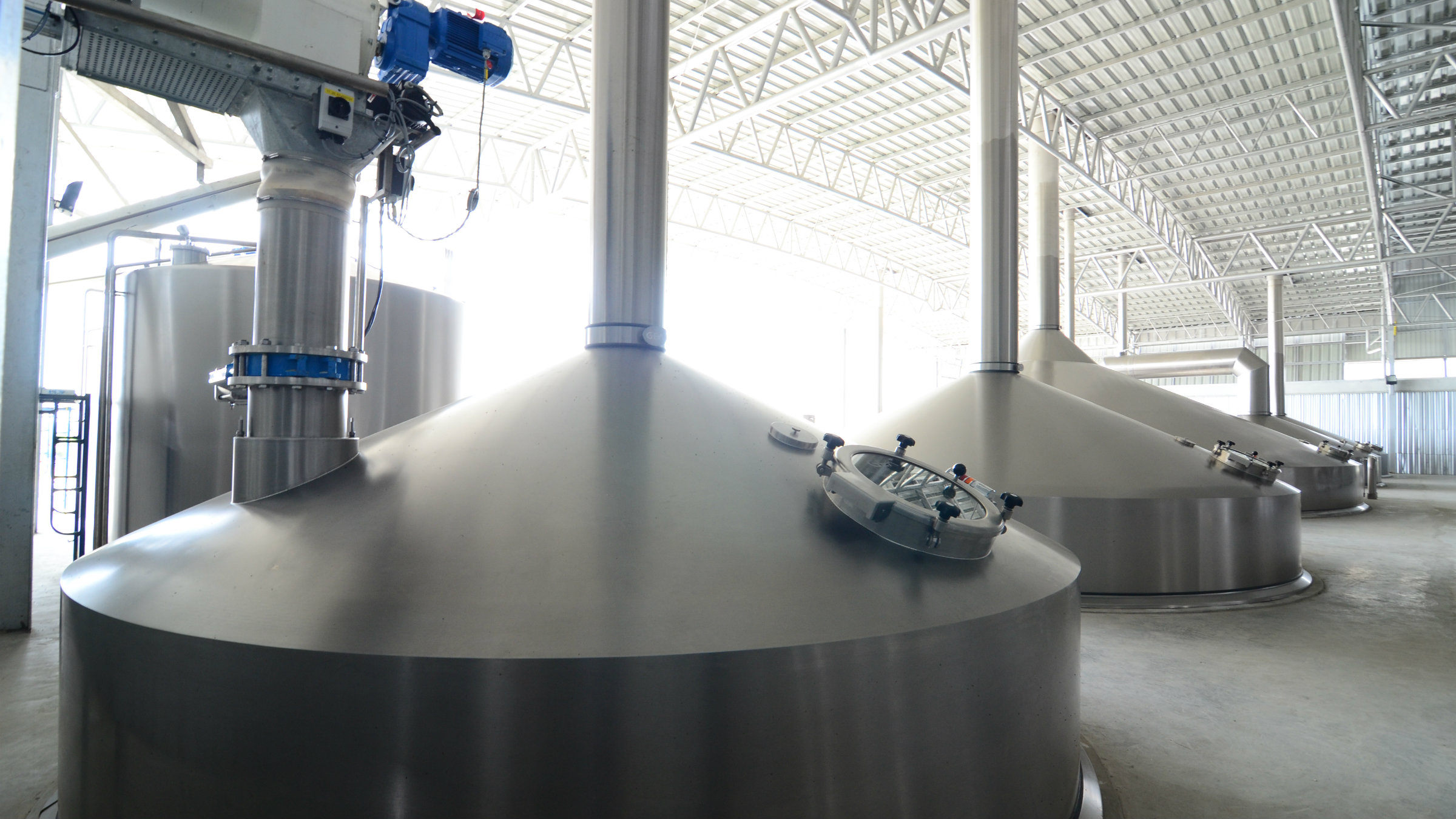 On the other side of the world, and only a few years later, Huppmann was asked to build and install a new brewhouse and utilities refrigeration plant for Thailand’s oldest brewer, Boon Rawd Brewery near Bangkok in 1968. Well-known for their famous pale lager Singha beer, named after the powerful lion found in both Hindu and Thai mythology, Boon Rawd is itself a lion in the Thai market. With Huppmann, and later GEA Brewery Systems as its partner of choice, Boon Rawd has followed up with multiple brewery updates and several greenfield projects throughout Thailand, including the latest expansion at their Banglen plant where GEA brewery technologies enable them to brew and fill millions of bottles and cans can daily. 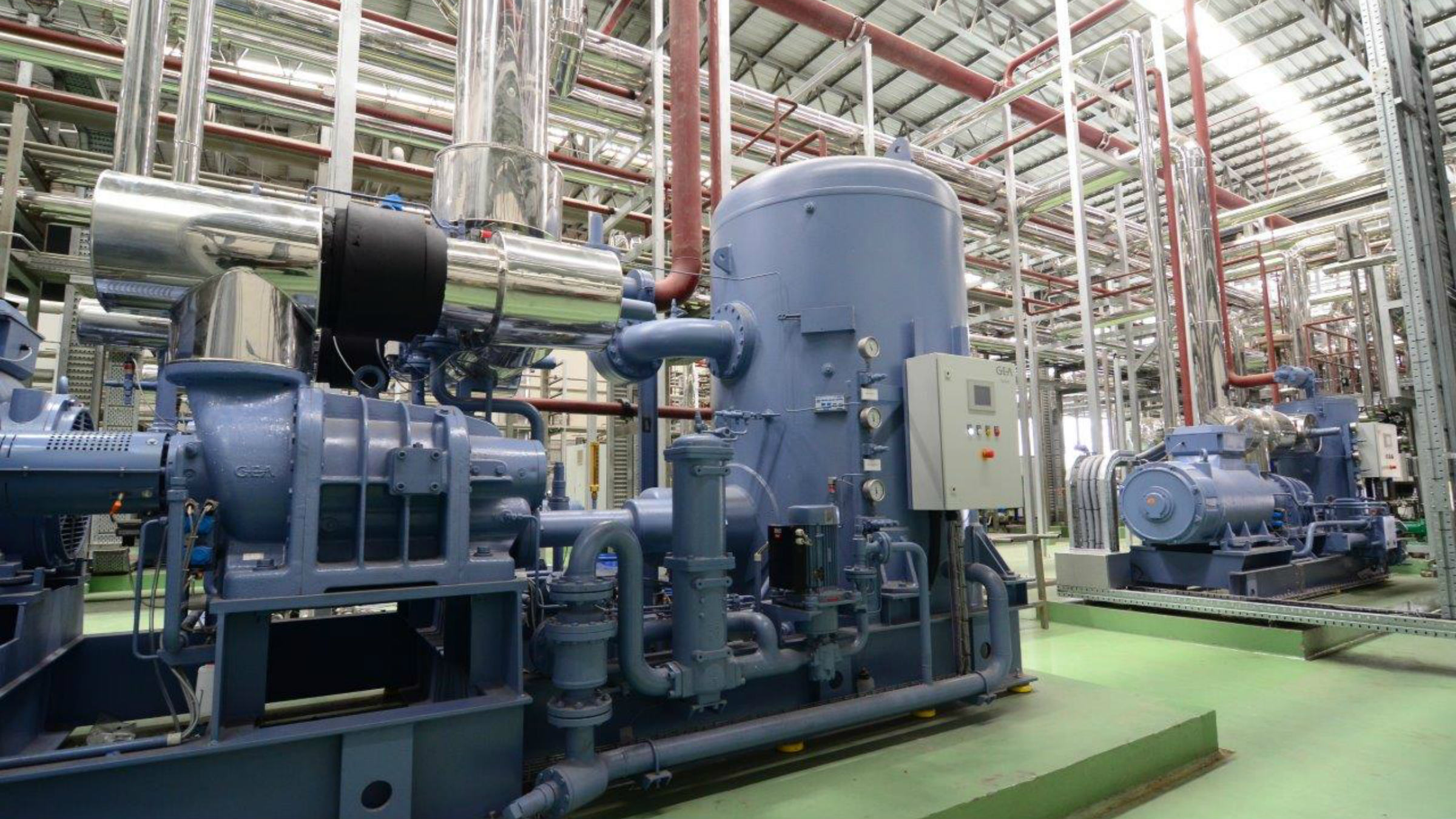 Huppmann, and later GEA’s ability to quickly and seamlessly update and expand plants on-time without interrupting existing production has led to a trusting partnership that has lasted more than fifty years. An essential aspect of this relationship requires meeting Boon Rawd’s demands for energy-efficiency and smart resource management. Any work undertaken is always evaluated against how well it can support the brewery’s overall social responsibilities and goals – no small task when you consider the group’s output for beer alone is more than two billion liters per year, of which about 10 percent is slated for export.

A safe harbor and future for Huppmann expertise

Over its business lifetime, Huppmann survived two World Wars; witnessed three generations of Huppmann family leadership followed by another two generations of management via the Lenz family and underwent a handful of moves, all the while serving diverse brewery customers around the world. But as the winds of change sometimes do, they began to blow in a more challenging direction, including financial difficulties against a backdrop of a looming global economic crisis. Likewise, increased consolidation among breweries created an even greater demand for brewery manufacturers with end-to-end product and service portfolios – and with global reach.

GEA acquired Huppmann in 2006, and then in an important strategic step, merged Tuchenhagen Brewery Systems (purchased in the 1990s) with Huppmann to form GEA Brewery Systems in 2009. This historic move – bringing together this much sought after hot and cold block expertise – enabled GEA to solidify its position in the brewery industry by offering customers full processing lines. A credit to its top facilities, people and technologies, GEA chose to take over the Huppmann site in Kitzingen, where today, GEA Brewery Systems maintains one of its two addresses: Heinrich Huppmann Street 1 – a tribute to the man and the company he founded 145 years ago.

Thomas Huebner, today Head of Sales Support, Beverages & Beer for GEA, joined Huppmann in 2005. “The merger,” he says, “boosted Huppmann and gave us a new perspective for the future.” With a humble yet proud tone he explains: “Brewing is a very emotional industry. Tuchenhagen was – and still are through GEA – masters of the cold block and have fantastic engineers; but those great brewery smells that everyone loves – they’re coming from the brewhouse. We love the craft.” Adding, “Huppmann valued all of its customers – whether they were more low-key, emotionally-driven and entrepreneurial or had a more sales and business-driven approach. As part of GEA, we’re still able to move easily between these very different customer worlds.”

Craft brewers have a really strong emotional connection to Huppmann, while industrial brewers appreciate having a strong global player by their side.”- Thomas Huebner, Head of Sales Support, Beverages & Beer, GEA

When he joined Huppmann in 1980, Günther Fischer was only the second software engineer that the company had ever hired. His control systems team eventually grew to more than 30 people by 1996. Reflecting today in his GEA role as Senior Project Manager Automation for brewing, he believes joining GEA “was the best thing that could have happened to Huppmann.” Adding that, “It didn’t take long before processes were in place and there was every indication that we were on a path to succeed. Huppmann’s reputation and technical know-how, for example, helped GEA successfully enter the craft brewing segment.” Klaus Bonfig, who joined Huppmann in the early 1990s and is today Head of Utilities for brewing at GEA states, “Many of our Kitzingen employees started at Huppmann as trainees when they were just teenagers. The Huppmann spirit is still alive and well; we’re proud of our history and happy that we’re still able to do what we love.”

Bringing together the best of both worlds for brewers

Today, GEA and brewing go hand-in-hand. In fact, every second liter of beer brewed globally passes through GEA processing plants and components. Whether it’s our engineering, oversight of complete brewery plant set up, warm or cold process equipment, utilities, service or training, GEA helps customers achieve their brewing goals, which today means not only brewing great beer, but also minimizing costs and wastage – which includes water, energy, raw materials as well as labor. Our vision of the brewery of the future – which we call Brewery 4.0 – combines the process of continuous beer production with just-in-time production technologies while harnessing the potential offered by digitalization. This approach affords customers maximum transparency and flexibility along the supply chain while simultaneously reducing their level of tied-up capital. 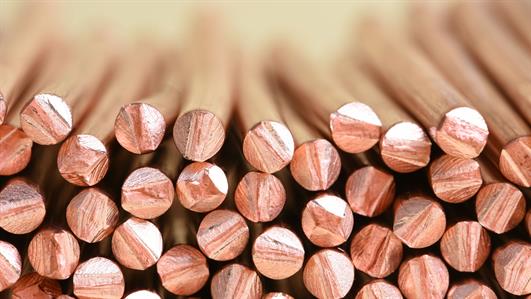 Now largely replaced by stainless steel, copper was once the metal of choice for brewery construction. That’s because it’s very malleable and can be formed into sheets, which allowed for large brewing vessels, sometimes referred to as ‘coppers.’ Copper is also an excellent conductor of heat, which was critical when kettles were commonly direct fired. In trace amounts, copper is also a nutrient required by yeast; wort is mildly acidic and dissolves the small amounts of copper necessary for good yeast health. And humans, like yeast, require trace amounts of copper – 1-2 mg per day in a healthy diet – for normal cellular function. Within brewing, copper is used to reduce sulfide flavors and aromas, which can be unpleasant and are a result of beer fermentation.

However, copper does have its drawbacks. It is difficult to clean – much more difficult than stainless steel. It is also relatively soft and lacks steel’s structural strength. Although brewhouses are sometimes still made with copper cladding for aesthetic reasons, vessel interiors are almost always lined with stainless steel.