So, you’ve popped out to shops and decided to pick up some chicken nuggets - a quick and easy lunch option that everyone enjoys. These days, with the increasing awareness of the damage done to the environment by plastic packaging, your fast food is likely to arrive in a cardboard tray. Great - you can rest assured on that front. But what about the process used to actually create the chicken nuggets? Can food manufacturers do anything to reduce the impact on the environment from their production processes, whilst still maintaining the product quality we all expect? 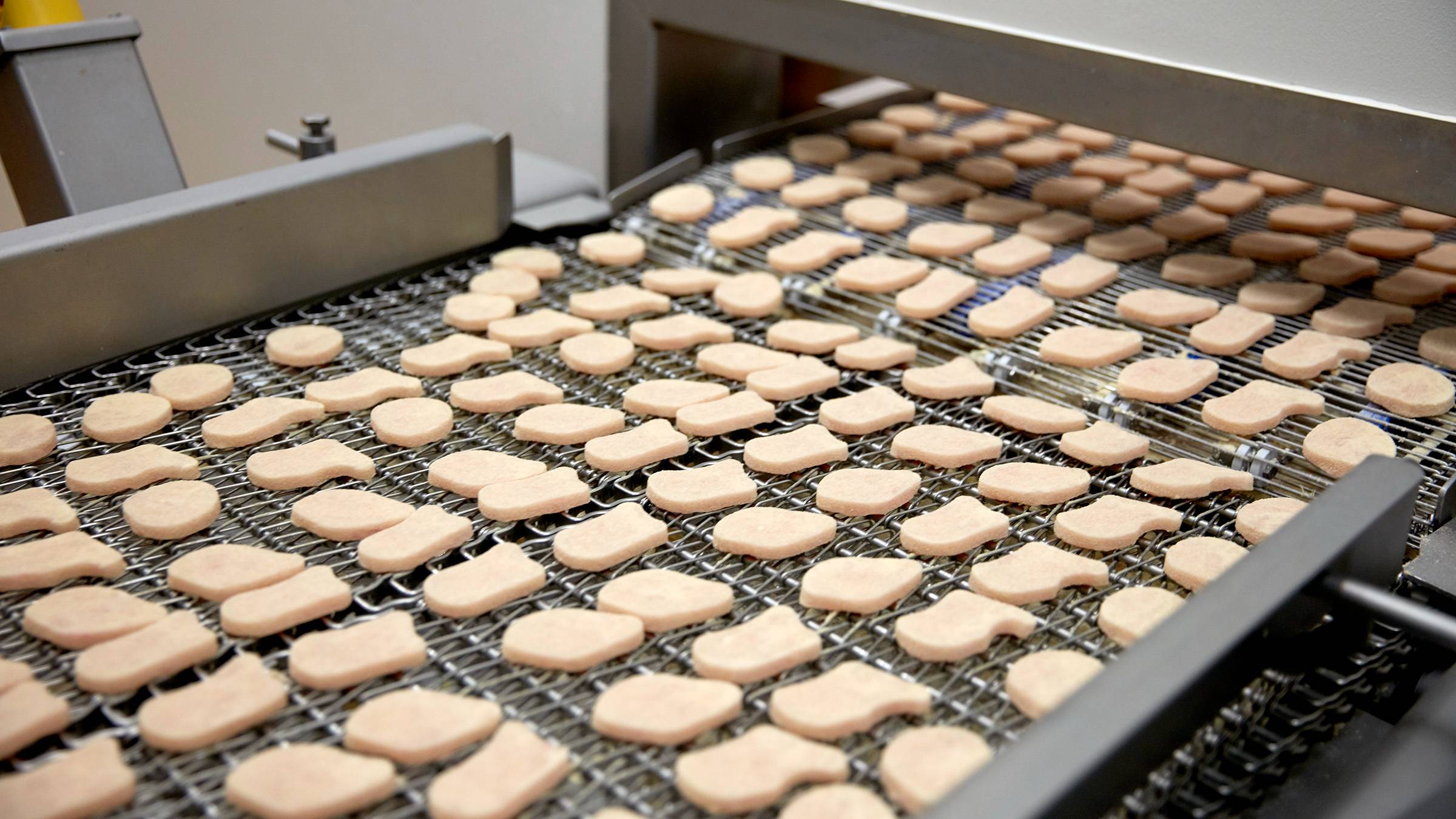 Producing large quantities of popular fast food items such as chicken nuggets with consistent, repeatable results, every time is a highly sensitive process. With leading fast food outlets insisting on increasingly stringent product specifications, it has become a fine art. Any marginal deviation on a production line can affect the quality, and it already starts at the basis of the product - the viscosity of the meat mixture. Not having that under full control will ultimately affect the finished product at the end of the process.

Maintaining a safe temperature of the ingredients is especially crucial. Not only does this help to prevent spoilage, it also helps to ensure that the optimum viscosity of the meat mixture is maintained throughout the initial forming process, leading to successful, perfectly created nuggets. But that takes a lot of energy use, specialised chilled rooms to store meat between the mixing and forming stages of the process, and a somewhat complicated system that is reliant on human ability in order to prevent contamination or degradation of the mix.

Our experts at GEA have designed a solution we call Batch2Flow that solves these challenges, saving energy and water and significantly reducing the use of cleaning chemicals. To move the mixed product from the mixer to the former, most producers use standard 200L trollies. It’s hard physical work, and inevitably, there’s a time delay between the meat leaving the mixer and entering the former.

Industrial mixers work quickly, so before the first trolley can be loaded into the former, the next batch is filling up another trolley. So, one person has to quickly move the trolleys into a cold store while another moves them one by one from the cold store to the former. In the meantime, the optimum temperature and viscosity of the mix is starting to deteriorate as it moves towards the ambient temperature. And, if a trolley gets forgotten, it results in costly wastage as the contents will have to be disposed of. In the worst-case scenario, a forgotten trolley could be mistakenly loaded into the former, seriously risking the food safety of the product. Even when all goes to plan there is wastage, as residue remains within the trolleys, so these have to be cleaned repeatedly with hot water and chemicals. 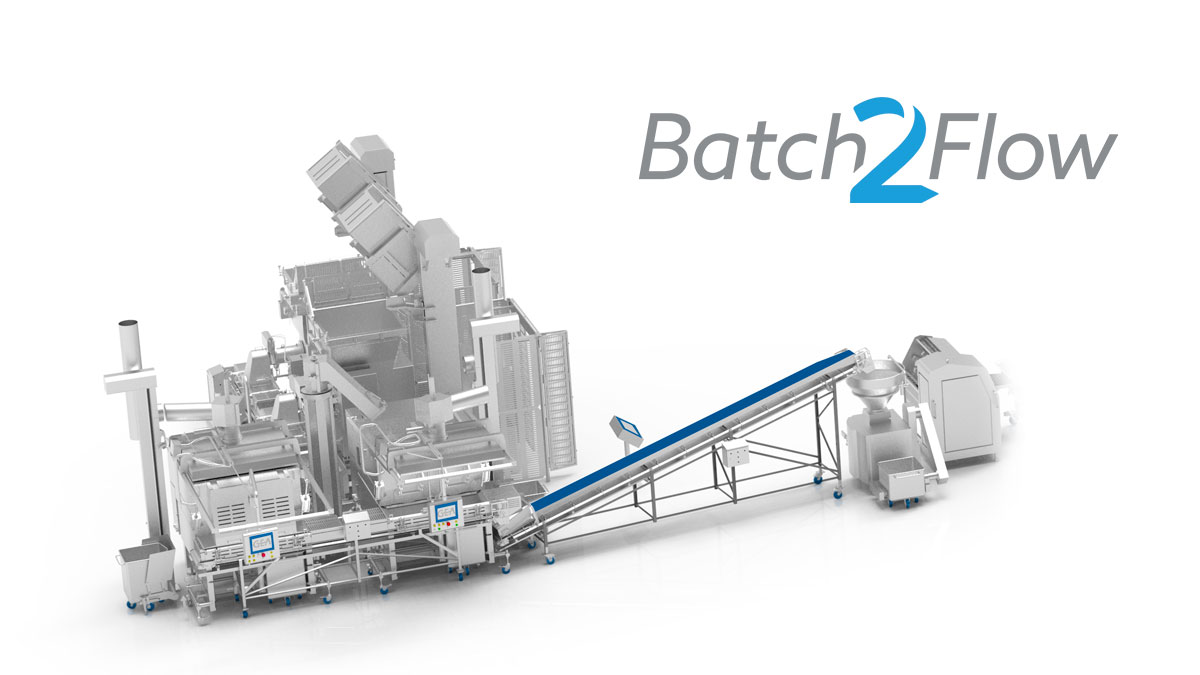 Batch2Flow eliminates these difficulties by moving the mix seamlessly and rapidly along a conveyor system from the mixers straight into the former, and the mixers have special unloading steps to allow controlled portion delivery onto the conveyor.  No energy-consuming cold stores are needed, food waste is avoided, cleaning costs are significantly reduced, and there is full traceability as nothing is removed from the line.

It’s a simple solution, but one that comes with additional benefits for food safety too. No innovation comes without a small element of risk, but at GEA, overcoming these risks has become a passion. We noticed that the cold metal trolleys in a forming line had a tendency to attract moisture - condensation which has the potential to drip off and contaminate the mix when the trolley is tipped upside down and emptied into the former. And in tipping the trolleys upside down, the four wheels which have been on the floor are exposed above the product, time and time again. Batch2Flow completely removes these risks, whilst minimising waste, reducing energy consumption and allowing a fully seamless process that produces a consistent, delicious product every time.

What’s more, processors using Batch2Flow technology can rest assured that not only are they using a process that is efficient, energy-saving and hygienic, but there will be savings involved for the bottom line too. Energy savings mean there’s a lower outlay at the plant, removing manual handling from the line means that labour costs are reduced, and reduced food waste means higher yields. It’s a simple solution with far-reaching benefits for plant managers at one end to consumers at the other. 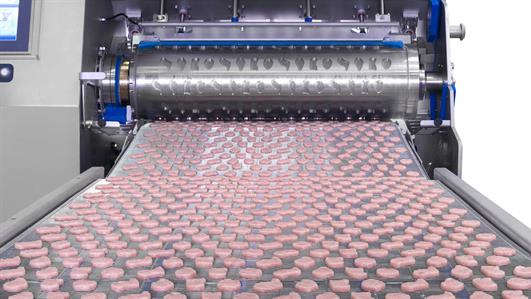 Would you like to know more about nugget production or any other coated formed styles of foods? We offer full-line solutions as well as a single piece of equipment to support you in this process, would that be poultry, fish, or meat-free alternatives. Curious to learn more?