The largest milking carousel in China is also the first of its kind in the Asia-Pacific region. GEA installed its most powerful milking carousel from the DairyRotor series for Lvyuan Animal Husbandry, China's leading producer of raw milk. The 80-stall GEA DairyRotor T8900 milks the 10,000 cows from Lvyuan farm in Lianyungang in the Jiangsu Province in multiple shifts, three times a day.

"As soon as the customer found more land and decided to expand in the northern part of the country, they contacted us; we suggested they consider the GEA DairyRotor T8900 rotary parlor. Even though it had not yet been released in China, Lvyuan agreed to become the first farm there to install one," explains Bright Xiong, Head of Service, GEA China. Lvyuan ordered the T8900 at the end of 2019 with the goal of using it by mid-January of 2020.

With just one month to complete the installation and commissioning, the team of GEA colleagues from Germany and China collaborated during an intense period running right up to Christmas 2019, to ensure the customer could begin production by the Chinese New Year in 2020. "A lot of communication was required. So much was happening in parallel and then during the holiday season as well, which made it challenging. That said, all of the GEA teams worked extremely well together; to achieve what was in effect a turnkey installation in one month was extremely satisfying for all parties," says Xiong. Farm owner, Lu Guangqun, confirms the success of the project, reports that all basic milking functions are stable and the T8900 is working efficiently. 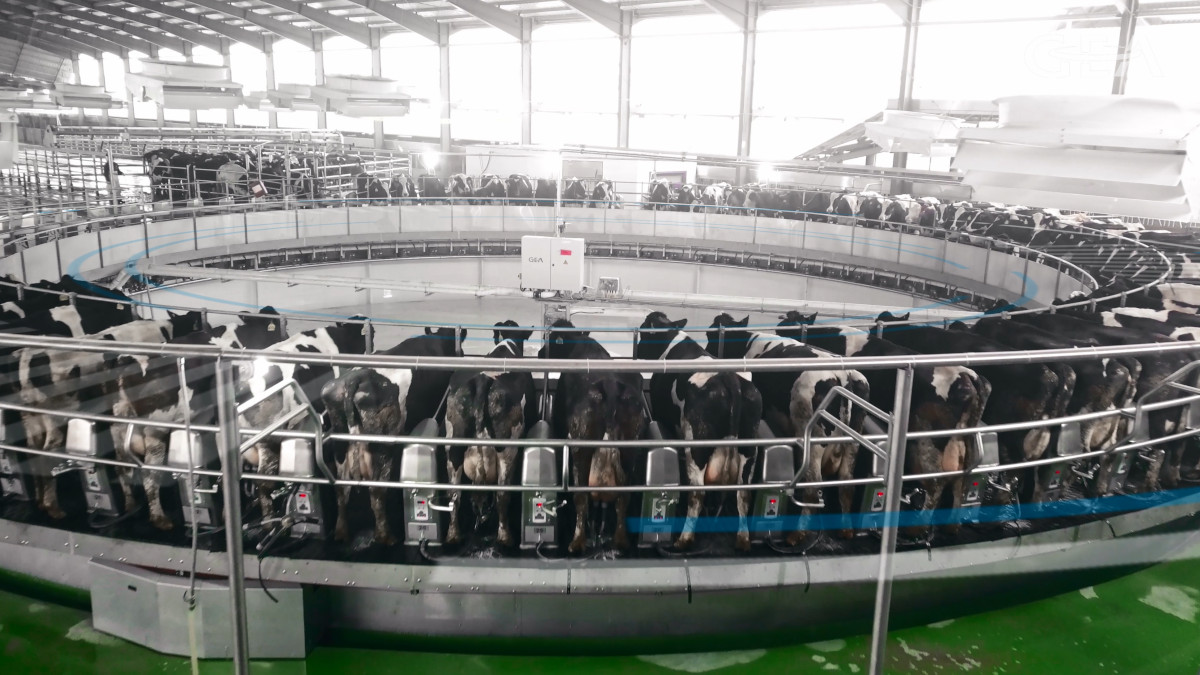 GEA has installed and commissioned the largest milking rotary parlor in China at Lvyuan Farm in Lianyungang which milks 10,000 cows. (Photo: GEA)

Around 70 percent of the milk consumed in China is ultra-heat-treated (UHT), which means it can last for months. The heat process does impart a slightly different taste when compared to fresh milk. Today, there is increasing demand for fresh milk in China, therefore, manufacturers and processors are looking for Chinese dairy farms that can provide high quality fresh milk rather than continuing to import it from overseas.
Mark Smyth, Head of Country Support, Greater China at GEA, says that a product like the T8900 fits the growing market perfectly: "With up to 120 milking stalls this milking rotary parlor is especially developed for medium sized to large commercial farms. It is capable of operating effectively and reliably for up to 22 hours a day. Because the number of cows on these farms is so large and they're milking the cows three times a day, the rotary needs to deliver uncompromising reliability – the T8900 does that."
The GEA DairyRotor T8900 is tailored for superior performance and seamless processes right down to the smallest detail – from cow traffic through to process handling and milk flow. “All system components of the T8900 are extremely durable and designed to withstand the demands of continuous operation. Moreover, the T8900’s robust stainless-steel surfaces are easy to clean. Its full-size splashguard keeps the interior safe and dry and the sloped deck allows for easy and clean draining of water and manure,” explains Smyth. “There are many customers in Europe and North America who are already successfully milking with the T8900; now GEA begins rolling out this parlor in Asia in the upcoming months to meet the demands of the market.”