Robotic milking operations have the potential to reach new levels of efficiency with GEA’s proven In-Liner Everything technology. Every step of the milking process — stimulation, teat cleaning, forestripping, milk harvest and post‑dipping — is performed in a single attachment. This uniform, quick and comfortable process, all occurring within the teat cup, is key to harvesting excellent quality milk while maximizing the number of cow milkings within your robotic milking facility.

Proper stimulation at every milking

GEA robots are equipped with patented and legendary StimoPuls technology — a mechanical stimulation system backed by decades of use with GEA pulsators on conventional parlors. StimoPuls stimulation begins as soon as the teat cup attaches, at the same time as cleaning in an ideally timed sequence.

StimoPuls stimulation is essentially a reduced “B-Phase” or liner open phase where the liner is gently compressed around the teat in the closed position (no active milking). The pulsation rate can go from 60–300 pulses per minute so the liner starts to vibrate, replicating tactile stimulation by the operator. The StimoPuls action can be programmed for each individual cow based on stage of lactation — 20–30 seconds for a fresh cow and 60–70 seconds for a late-lactation cow.

The transition from StimoPuls stimulation to milk harvest is completely seamless and stress-free for the cow. Oxytocin is in full motion and the teat is clean, well‑stimulated and dried-off with an injection of air into the liner — just in time for quick and gentle milking.

The In-Liner Everything process replicates the ideal prep procedure you use for milking operator training but now it is 100% process controlled for every cow at every milking.

The In-Liner Everything process delivers the most hygienic teat cleaning on the market. Each teat gets their own individual teat cup for cleaning — there are no shared cleaning cups or brushes. This hygienic process helps prevent cross‑contamination of mastitis-causing bacteria from teat to teat.

One teat cup per teat for every cow at each milking provides sophisticated teat cleaning and the best in teat hygiene.

Once the teat cup is attached, cleaning or pre‑dipping begins — depending on country-specific regulations — at the same time as stimulation. The combined action of the liner pulsating in a timed sequence and the injection of water (or specially formulated germicidal pre‑dip) into the liner head, effectively cleans the soil load on the teat. Any wastewater or residual pre-dip is safely diverted to the dump line and will not comingle with the primary, saleable milk supply.

Part of the In-Liner Everything prep process is to extract those first few streams of milk from each teat. This milk undergoes a rigorous evaluation procedure through a system of milk sensors that replace the operator’s eyes and supports the decision‑making process.

If foremilk fails a quality check — such as color, which may indicate blood in the milk — it will automatically be diverted to the dump line. Other quality checks such as conductivity are recorded in the herd management software. Quality checks can trigger alarms or a supervised milking on the DairyProQ, so an operator can evaluate the cow’s condition. Herd management records will maintain this data — documenting historical trends to help employees make smarter decisions when identifying an illness, treating mastitis or culling.

Foremilk typically contains the highest level of somatic cells (as it has been sitting in the teat cistern between milkings). With In-Liner Everything, this milk is diverted to the waste line (just as it was stripped away on a conventional milking system) after analysis — and will not comingle with the remaining milk supply, preserving overall quality.

After milk is analyzed by the sophisticated set of sensors and data concludes the milk is consumable, the milk-decision valves open, milking begins, and the primary, saleable milk supply is transferred through the good milk line into the tank.

As with any GEA milking system, our goal is to maximize milk flow rates for a fast milking session while protecting teat-end health.

Shorter unit on-times, as a result of proper stimulation, ideal liner design, and proper systems settings, are best for the cow and long-term teat health, and better for overall productivity of the facility. Cows are milked out quickly and can return to eat and rest as soon as possible.

Plus, you can select to detach by quarter with GEA milking robots and remove the teat cups in the most optimal way. Sensors monitor milk flow by quarter — when one quarter reaches the milk flow detach threshold, the milking process for that teat stops. The milk-decision valve closes, post-dipping occurs, vacuum stops and the teat cup is removed.

Detach by quarter helps prevent overmilking teat by teat and facilitates a complete milk-out on all four quarters.

When one quarter finishes milking, a new milk sweep valve utilizes air to evacuate the milk remaining in the milk line into the receiver jar, to maximize total milk yield potential per cow.

Then, the GEA milk-decision valve automatically closes. The safety valve must be fully engaged before post dip dispenses through a valve (separate from the milk line) with the help of a pressurized injector. Dip is applied to each teat through the liner head and a burst of air pushes any remaining dip from the dip valve toward the teat. Vacuum ceases and the teat cup is removed — revealing a coating of teat dip around the teat.

Proper coverage — Achieve even dip distribution around the entire teat and teat end. In-liner dipping occurs while the teat is still slightly extended and under vacuum. This process allows dip to get into teat skin folds and creases for coverage like no other application device.

Excellent protection — GEA utilizes the highest quality teat dips formulated for the best performance in our In-Liner Everything process. The fresh dip provides the protection cows need against mastitis-causing pathogens between milkings.

Economical application — The amount of teat dip used is adjustable by farm. In many cases, dip quantities are lower than spray systems.

Quick and controlled process — Teat dip is reliably applied, coating the teat skin and teat end at every milking. The process is fast with no extra time spent in the milking box or parlor.

With in‑liner application, dip is applied directly to the teat and teat-end — not sprayed unevenly or covering the udder where it is not required and oftentimes wasted.

The GEA In-Liner Everything cow prep and milking process is a revolutionary system for robotic milking machines that truly maximizes efficiency in every way.  Because you only need to locate the teat and attach the teat cup once — not twice like other robots on the market that prep and milk with separate systems — you have more control of the prep time and you can take advantage of the cow’s natural milk let-down process for maximum milking speeds.  In-Liner Everything is available on all GEA DairyProQ robotic rotary milking systems and GEA DairyRobot R9500 box-style milking systems. 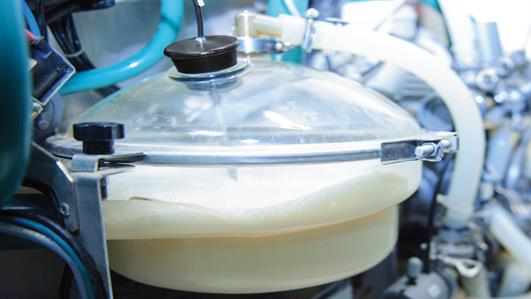 GEA’s milk-decision valve allows the In-Liner Everything process to work smoothly and bring new levels of efficiency to robotic milking systems. The valve is used to open and close the milk line — diverting cleaning solution, foremilk, teat dip residue and backflush sanitizer into the waste line and directing high quality, saleable milk to the tank — preventing contamination and promoting milk safety. This unique valve system has been thoroughly examined and reviewed by organizations such as the Food and Drug Administration (FDA) and Atlantic-Midwest Dairy Equipment Review Committee (AMDERC) — all of which have accepted the system. GEA is a leader in the marketplace when to comes to robotic milking innovation and we actively make regulatory compliance a priority.