GEA’s revolutionary In-Liner Everything technology performs every step of the milking process — stimulation, teat cleaning, forestripping, milk harvest and post‑dipping — in a single attachment. Here is why GEA pursued engineering this unique and forward-thinking technology for robotic milking systems.

1 Many other systems were not using a specially formulated germicidal pre-dip and GEA wanted to offer a model that could safely accomplish this task (in countries where pre-dipping is allowed).

2 Other robots were cleaning teats at a satisfactory level, but GEA thought it could be done better. Research from Penn State showed robot systems were missing teats when attempting to clean — 10% on average and up to 50% if there was a technical difficulty1. GEA wanted to facilitate a higher percentage of teats being cleaned — and cleaned more effectively.

3 GEA wanted to speed up the milking process and decrease box times. Other robots were prepping too slow — requiring two trips to the cow while using the camera twice to locate teats (the most-time consuming variable in the prep process). With In-Liner Everything, cow prep and milking all occur in-liner in one simple attachment — making milking faster and allowing for more milkings per box per day.

4 GEA wanted to improve post-dipping coverage on robot systems.  Teat spray devices can perform poorly in terms of coverage of all sides of all four teats and all teat-ends.  Dipping in the liner facilitates significantly improved coverage, properly protecting cows from mastitis-causing pathogens in between milkings, when they need it the most.

5 GEA wanted to reduce movements underneath the cow, which has been linked to reducing stress levels and generating a more calm milk harvest process.  We think that is a good thing.

There are countless more reasons why In-Liner Everything is optimizing robotic milking cow prep and milking processes, and leading the way in robot efficiency.  Read and understand more about the technology here.

Get All the Details on In-Liner Everything 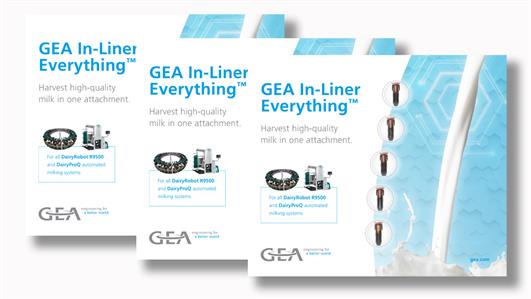 One and done teat cup attachment

Robotic milking operations have the potential to reach new levels of efficiency with GEA’s proven In-Liner Everything technology. Every step of the milking process is performed in one single attachment – from stimulation to post-dipping. This uniform, quick and comfortable process, all occurring within the teat cup, is key to harvesting excellent quality milk while maximizing the number of cow milkings within your robotic milking facility. Proven safe - proven effective - proven reliable – GEA In-Liner Everything!