The expression troubleshooting may sound quite dramatic. However, what is understood here as troubleshooting is in fact any intervention that changes the operational parameters in order to obtain the desired result. An operator of a spray dryer is exposed every day to situations where he has to decide what to do if, for instance, the final moisture content of the product is suddenly too high. This is also a kind of mini-troubleshooting intervention. On the other hand there are troubleshooting operations requiring great effort in analyzing the situation and proposing a strategy for tackling the problem. This may be the case if one of the more sophisticated properties of the powder is deviating from the specification, due to lack of dryer capacity, formation of serious deposits in the dryer, bacteriological problems etc.

It is impossible to give exact instructions for each case. However, the paragraph below presents at least some guidelines for the most typical problems. The first approach to most problems involves:

- careful study of the production documentation around the time when the problem appeared, especially:
- log-sheets to find out any deviations from usual operating conditions,
- maintenance log-books to find out what changes or maintenance work on the dryer or its components have been conducted,
- laboratory analysis records to find out if any change of product quality has been detected,
- check the calibration of the control instruments which may have some connection to the problem,
- check independently the laboratory results,
- conduct laboratory analyses of the properties, which may have some connection to the problem, but are not part of the daily routine analyses,
- interview the staff individually about observations and opinions.

In a factory producing the highest quality products, small adjustments of the plant operating conditions are part of the daily routine in order to compensate for small changes in external factors, mainly air humidity and milk composition. Factors influencing individual properties are described in chapter 10. The most important product properties, i.e. moisture content, insolubility index, scorched particles and bulk density are usually detected by process control in 1 - 2 hour intervals. The key person to decide what action to take to re-establish the desired target powder specification is the operator.

The task of the technologist is to follow the variations in incoming milk and powder quality and to recommend the operating conditions for the operators. However, it is not unusual that suddenly, without any obvious reason, quality exhibits a serious deterioration. A more extensive investigation must then be conducted following the guidelines presented in the introduction to this chapter and using the guidelines for all involved individual properties as described in chapter 10. One of the external conditions, which can fluctuate quite extensively and which may have considerable influence on both powder quality and capacity, is the ambient air humidity. It is surprising how little attention is paid in practice to this factor. A humidity-meter placed in the main air intake can eliminate the necessity for a powder moisture adjustment, thus enabling a preventive correction before a deviation appears.

Fig. 12.2 shows levels of air humidity during a two week period (February 1992) in New Zealand (North Island). It is interesting to observe that the daily variations are between 3 - 7 g/kg. The maximum humidity in this period was 21 and minimum 11 g/kg. This would mean that for a single stage spray dryer operating at a constant outlet temperature, the moisture fluctuations would be in the range of 0.86% (see Fig. 10.1) or alternatively it would be necessary to adjust the outlet temperature within the range of 4.3°C.
Fig. 12.3 demonstrates the average month’s values and maximum month’s values of air humidity on the European continent near Munich. The daily variations cannot be seen on this graph, but the difference between average and maximum values indicates that they are of the same order of magnitude as shown on the previous figure.
Another factor often ignored, but with a great influence on the powder quality, is the variation of the composition of the processed milk.
Fig. 12.4 demonstrates the variations of total protein content in non-fat solids of milk in a region on the North Island of New Zealand. Such variations are extreme and seldom seen in other parts of the world. In Europe the maximum
value is about 42% protein in nonfat solids and the variations are smaller. The influence of protein variations on viscosity is shown in Fig. 9.7. Generally, milk with up to about 40% protein can be processed by adjusting the operating parameters, mainly the concentrate solids content correspondingly, but above this level, protein standardization is advisable.
12.3.

Deposits in the system

The use of computer for quality control and trouble-shooting

Every milk powder factory should have in the organization a function to deal with troubleshooting. This function represents a link between production and quality control. The person who carries out this function - a technologist - should have a thorough knowledge of milk powder technology, and also have the daily responsibility to generate a list of the set points of technological parameters for the next operation. To be able to carry this responsibility the technologist must collect information of the operating conditions and product quality data from each production, analyze the data and draw conclusions, based on statistical evaluation of the information collected, and decide which technological parameters (or combination of parameters) are optimum for achieving the desired quality properties of the final product.
Achieving first class powder quality is the prime goal. As earlier emphasized, efforts for improving or just maintaining this quality can be considered as a kind of troubleshooting. It would not be quite correct to think that with the present state of the art of equipment and technology, the optimum operating conditions are fixed. The performance of each spray dryer is influenced by a number of factors, and the optimum operating conditions to achieve top product quality have to be found individually for each plant and for each product specification. They must be checked daily and revised at relatively short intervals. Factors that cause variations in final product quality are, for example: raw milk quality, composition and seasonal fluctuations, plant location, building execution inclusive of air flow and temperatures around the plant, type and layout of the installation and its individual components, climate and air condition variations, especially humidity, during operation, etc.
Computer control is now universally applied for spray drying installations. The whole operation, including start-up and shut-down, is controlled by a computer, and during production the operational parameters can be printed out at regular intervals as a table or a screen-dump showing the numerical values on a flow-sheet of the installation. The advantage of this system is reliability of both time interval and accuracy of information. The disadvantage is that the
computer produces information on many pages of paper.
The computer stores the information as so-called historical trends, which remain in the computer’s memory for a certain time depending on storage capacity, and can be visually studied as graphical trends of individual or combinations of parameters on the screen and printed out as screen-dumps. Again, the information collected in this way may be spread over a number of pages. Needless to say, for the technologist it is much easier to collect the information needed from a one page log sheet. Besides, computer print-outs should never be a replacement for manually written log sheets. There is a simple reason for this, namely that operators will lose the feeling for and contact with the technological parameters if they are not forced to read and write down the data every hour, and consequently become totally familiarized with them.
Control computer systems record the data at pre-programmed intervals and store them in memory for a period of time depending on the data storage capacity. The system described here makes it possible to collect the operating parameters at the end of each operation directly from the process control computer and to save them on other data storage media. Such a file contains usually much more information than those which can be found on the manually
written log sheets. From there they can be further processed and converted, depending on their format, either directly or after using the translation facility of the spreadsheet system used into a spreadsheet file. The use of a computer with spreadsheet program for this purpose was described by Písecký [50].
The analytical results from the laboratory, both in-process and final control, can be entered into these log sheets, which are then saved for future use. The information can also be used to generate a survey of production quantity for each day, or a given period of time, energy consumption, production economy, etc. The possibilities for utilizing this information are in fact almost unlimited.
The system is supposed to be a tool for the technologist and production supervisor, enabling them to follow, control and optimize the quality of the product and the production rate. 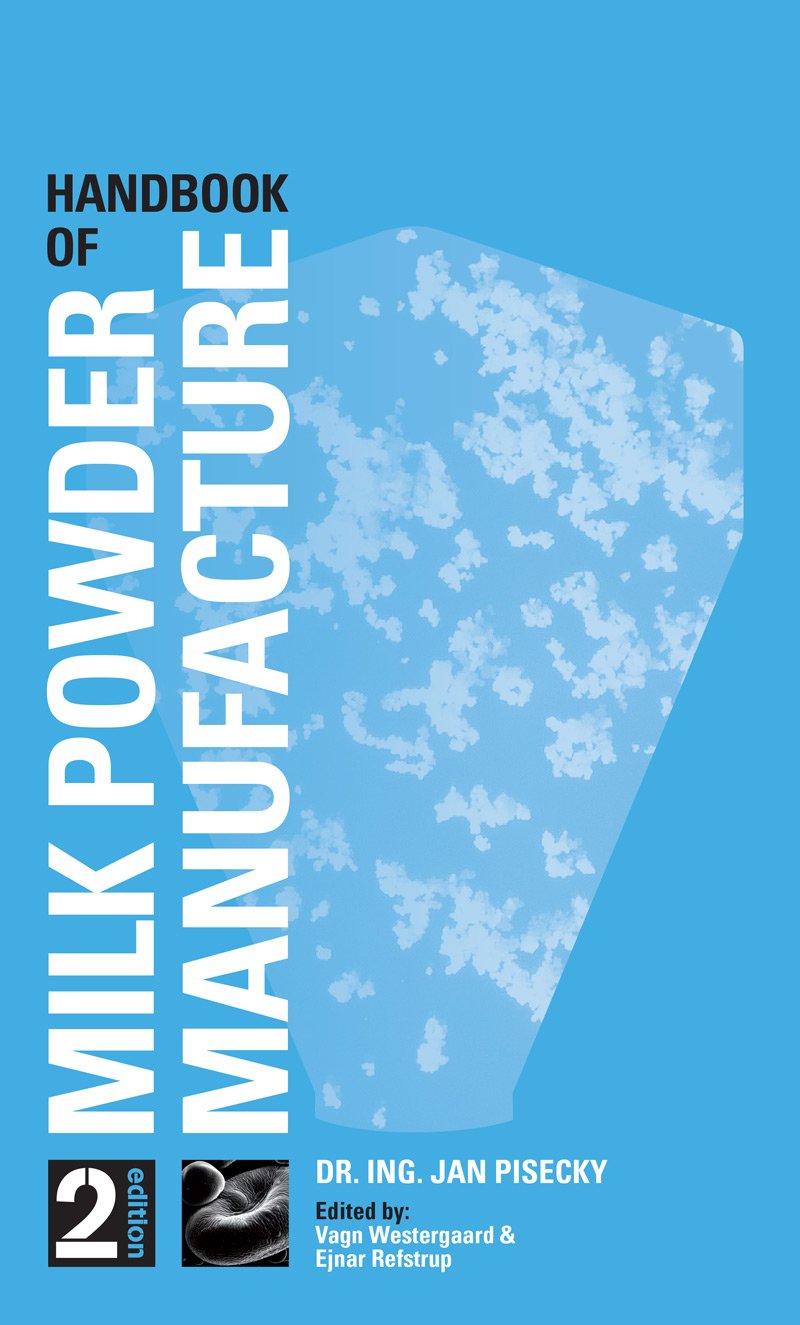 The Handbook of Milk Powder Manufacture is a valuable reference book for dairy processing engineers wanting to take a deeper look at the complex world of milk powder processing.