Wolf ButterBack is a specialist in Danish pastries, which the company produces for bakeries. The bakeries receive the pastries frozen and ready-to-bake in-house to sell to their customers.

Wolf ButterBack recipes are recipes for success. The first plant was opened in the German town of Fürth around 20 years ago and, since then, three more have been opened at the site. The technology center in Plant 3 at Wolf ButterBack is designed to accommodate growth, so that further facilities can be added as production capacity is expanded. The available space offered GEA the opportunity to field test a liquid chiller system with GEA CompaX – their first semi-hermetic, compact screw compressor for ammonia with a gas-cooled motor. The pilot system hasn't stopped since! Right from the start, it has had to function as the base-load machine in a system of several chillers in order to provide the cooling power needed for the deep-freeze storage facilities, the spiral freezer and the deep-freeze rooms in the plant, as well as the cooling needed for the pastry blast chiller. 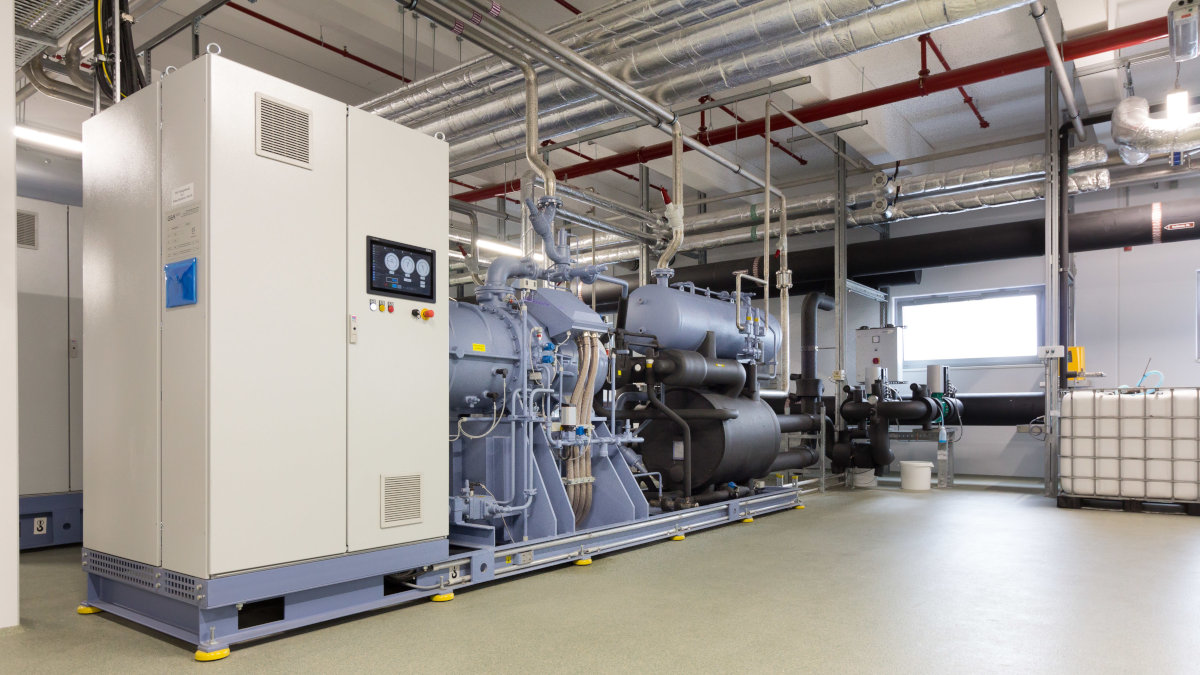 Less space required, but similar performance: the new liquid chiller is based on the compact GEA CompaX compressor, which has no external piping.

Industrial use as a base-load machine

In the first stage of the cooling cascade, the new ammonia liquid chiller – now on the market as a series product under the name BluQ – delivers cooling at approximately -10°C and thereby provides a brine cooling circuit, together with two other peak load/reserve machines. This connects the ammonia chillers to the second cascade stage, which consists of multiple CO2 composite systems and produces temperatures of between -32°C and -42°C.

The performance level of GEA BluQ is generally sufficient for the first cascade stage with the current production capacity of Plant 3. Although its compressor is smaller than that of its sister system, BluAstrum, which is set up beside it, the new 3-in-1 design combines the proven GEA screw compressor, a suction gas-cooled electric motor and an oil separator in an extremely compact form. With a cooling capacity of 600 kW for a supply at -10°C, this liquid chiller offers almost the same performance as a GEA BluAstrum 1500. 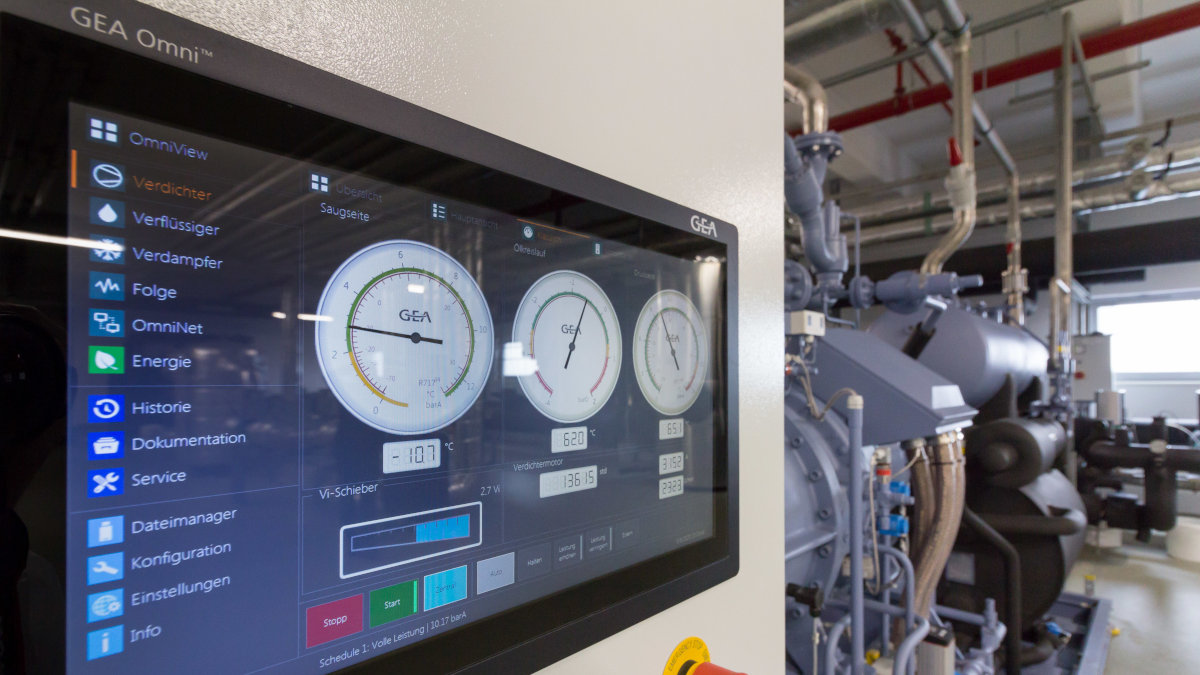 The GEA Omni control panel is clear and easy to use thanks to the high-definition, multi-touch interface.

Power is not everything. What impressed Jens Geyer, Head of Cooling Technology at Wolf ButterBack, even during installation, was the small amount of space required by the liquid chiller. For him, a further plus is the modern GEA Omni control panel, which controls the entire composite chiller system, enabling autonomous operation of the machines if the main controls fail.

After two years of usage,

The chiller with the GEA CompaX has been in use here since 2018 and, in that time, has logged 15,000 operating hours, meaning it has been in operation almost 24/7. Even on hot summer days with outside temperatures of up to 36 degrees, the compressor worked perfectly and responded impressively to load changes.”- Jens Geyer, Head of Cooling Technology at Wolf ButterBack

The pilot system performed so well in the field test that the reserve GEA BluAstrum machines remained on standby almost the entire time. “But they are not surplus to requirements,” explains Geyer. “With the expansion of Plant 3 to include additional production lines, the cooling demand will increase.” It is perfectly possible that, in due course, there will be more GEA BluQ systems with the CompaX compressor in the central cooling plant. Space has already been set aside for this.

Prior to its market launch, the GEA BluQ ammonia liquid chiller with the CompaX compressor proved itself in three installations. In addition to the system at Wolf ButterBack already described, a second system was also put through its paces in an industrial capacity. The two systems have been operating almost constantly for two years and have proven their reliability. A third GEA CompaX has been installed to provide air conditioning. This is where GEA expects to see the greatest demand. After all, the CompaX compressor – the core component of the chiller – is designed for maximum reliability when installed in office buildings, laboratories, hotels or similar buildings with a lot of people.

Features that ensure this reliability include the low specific refrigerant charge of under 50g per kW, the semi-hermetic design with no external piping and the fact that its construction means the shaft does not have to be sealed.

With cooling capacities of up to 1300 kW with the GEA CompaX 700 (at 6°C/12°C and a maximum speed of 5200 rpm) or a maximum of 1600 kW with the GEA CompaX 900, the GEA BluQ liquid chillers are ideal for medium and high air conditioning requirements. This is where its benefits really stand out – such as excellent efficiency with full and partial loads, and easy installation thanks to its space-saving design.

The GEA CompaX is the first semi-hermetic compact screw compressor from GEA designed for the natural refrigerant ammonia. With its secure construction, easy installation and compact design, the compressor is ideal for providing cooling to large-scale premises. 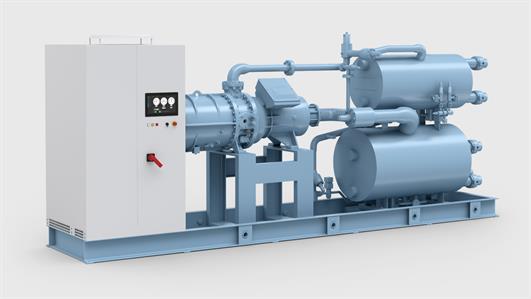 GEA BluQ is among the world‘s first ammonia chillers with a semi-hermetic compact screw compressor, developed as an environmentally friendly solution in line with the global trend towards a greener future through the use of natural refrigerants.