“My father-in-law Luc Mestdagh established our company in 1978 and we’ve been making steady progress ever since then,” says Marc Gombert. He and his wife Hilde are now firmly entrenched at the helm of the Mestdagh business. The Veurne-based family firm makes superior-quality frozen foods based on traditional Belgian recipes: ice cream, cakes, shrimp croquettes, cheese croquettes and ready meals. “Last year we set a new standard for ice cream. Our new GEA homogenizer played a major role in that. It wasn’t long before our efforts paid off and we landed a great new contract, which will triple our ice cream turnover in 2017.”

“Forty years ago my father-in-law laid the solid groundwork for the success we enjoy today," explains Marc Gombert. “As owner and head chef of the floating hotel ‘La Péniche’ in Oostduinkerke, he began freezing the house specialities in a kitchen workshop in the cellar. This was in response to demand for his Grand Marnier soufflé, which was so popular with his customers that they wanted to take it home with them. He gradually expanded his range, and ice cream was one of the top favourites even then. Mestdagh vanilla ice cream was twice crowned 'Best Vanilla Ice Cream in Belgium’ in the 1990s.”

When the business was moved from the workshop at La Péniche to new premises in Veurne in 2004, Luc Mestdagh handed over the reins of the company to his daughter Hilde and her husband Marc. “My wife was fated to be a pastry chef. Even as a little girl, she used to help out in the kitchen and then after she graduated from hotel school she took her place in the company. I trained as an electromechanical engineer and worked for a few food industry ‘giants’, such as Côte d’Or, Nestlé and Pepsico, before joining the family business. Our combined experience is very important in every decision we make.”

“We now supply ice cream to catering establishments, wholesalers and retailers. The production process comprises four steps: heating, homogenizing, ageing and churning. Unlike most of our competitors, we don’t add any artificial colouring or flavouring and we aerate the ice cream as little as possible. In 2016 we took time to reflect and to set a new standard for the future. This was needed because tastes change and we want to sell a premium product that meets modern consumers’ requirements.”

“Our old homogenizer had seen better days – my father-in-law bought it second-hand 25 years ago – so we bought a new one. GEA was the obvious choice as far as I was concerned, because I was aware of their reputation as a reliable partner when I used to work for major food companies. What’s more, the One Series meets our requirements in every respect. Together with the GEA experts, we conducted exhaustive tests. I really liked the fact that, by playing around with the pressure in the homogenizer, we could decide for ourselves to what extent the fat molecules in the milk would be broken up. I knew that this process considerably affected the texture, but it was unbelievable that it also had such a decisive influence on the flavour.” 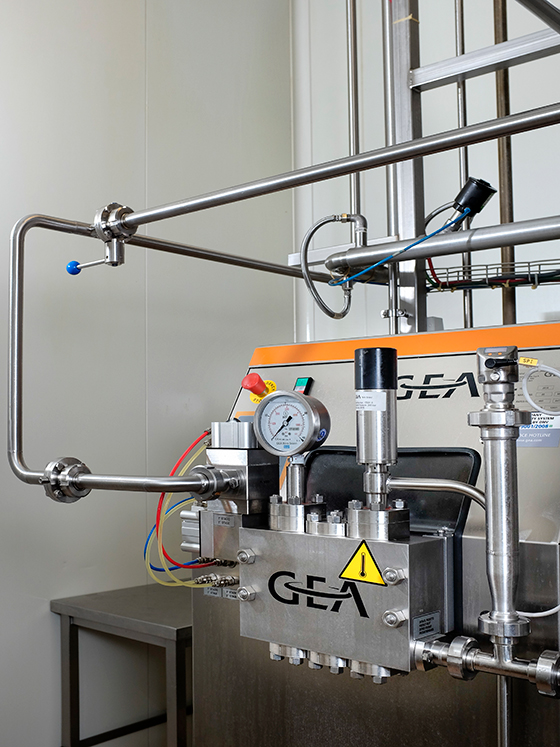 “Let me make one thing clear: achieving exponential growth is not what drives us. We prefer to make steady progress and put quality first. If we only had to make ice cream, we’d be under greater pressure, but we currently use only half of our machine capacity to produce 3 tonnes of ice cream a day. I take particular pride in the fact that we worked with the people from GEA last year to look for a solution and, thanks to our combined expertise, we were able to set a new standard. And we’re even more proud of the fact that, as a result, one of the top five wholesalers in Belgium – after lengthy testing with every possible manufacturer – chose our ice cream as the best in the country. This will triple our ice cream turnover in 2017.”

"At Mestdagh machines are not brought in to boost output, but to give added value to the end product." Marc Gombert

“I don’t like the term ‘artisan’,” Marc explains. “I prefer people to know that we make authentic, traditional frozen foods using true craftsmanship. And that we take a highly professional approach, for example by working to the BRC Global Standard, the most rigorous international standard for food safety. Our working practices are based on four essential elements: people, raw materials, recipes and machines. In our atelier, chefs and pâtissiers prepare everything with the greatest care and expertise. We don’t make any concessions with our raw materials: our ice cream, for instance, is made with milk from a local dairy farm, the only one in Flanders with Jersey cows. Their milk gives our ice cream a unique flavour. All of our recipes are authentic and original: our pistachio ice cream is brown rather than green because no artificial colouring is added. Last but not least, machines also have an important part to play: at Mestdagh, they’re not brought in to boost output, but to give added value to the end product.”

One Series can meet any production request for small and medium productions. They offer a simple design construction, complete with all the options needed to be easily integrated into the system, as ready-to-use and low maintenance units.