Shower gels, body washes, facial cleansers, toothpastes and soaps are personal care products that play an important role in helping us to keep clean, stay healthy and feel good about ourselves. Global manufacturers have developed an extensive range of liquids, gels, solids and creams that we can chose from to cleanse, refresh and invigorate us.

An important aspect of body care is exfoliation. Mild abrasive removal of dry/dead skin cells from the surface of the skin on the face and body unblocks and removes ingrained dirt from pores, improves blood flow, brightens appearance, neutralizes blemishes, and leaves skin feeling smooth and fresh.

To meet consumer demand the beauty industry has invested millions of dollars developing and incorporating mildly abrasive exfoliants into their products.

Exfoliants have traditionally been obtained from natural sources, including  crushed seed kernels, or pumice, but during recent years increased demand led to the development of synthetic alternatives, commonly known as microbeads. Usually made from polyethylene or polypropylene, microbeads offer a cheap, high quality and inert alternative to natural exfoliants.

The tiny particles in microbeads, which are less than 0.5 mm in diameter, are effective but gentle on the skin, and safe for consumers in use. However, there is growing global concern about the contribution of microplastics – from a wide range of sources –  to pollution in our waterways and oceans, and ultimately to human health and wellbeing. An investigation by scientists for the U.K. government cited figures indicating that taking just one shower could result in 100,000 plastic particles entering the ocean. Figures by the Environmental Investigation Agency (EIA) estimate that 80,000 to 219,000 tonnes of microplastics enter the marine ecosystem from Europe every year1.

The potential effects on marine life are manifold. The United Nations Joint Group of Experts on the Scientific Aspects of Marine Environmental Protection (GESAMP) states that microplastics can cause physical harm to digestive tissues, and because microbeads can absorb toxic environmental pollutants, they may also effectively poison marine organisms that ingest them.2

When scientists tested 504 fish taken from the English channel, they found that more than one third had plastics in their digestive tracts.3 Another study found that up to up 10% of a seabird’s weight may be made up of ingested plastics.3 Many of the more than 280 marine species that have been found to ingest microplastics play important roles in food chains and marine ecosystems.3

While research is ongoing into how far microbeads in the marine ecosystem might harm people by entering the human food chain, scientists fear that the presence of microplastics in foodstuffs could potentially increase direct exposure of humans to plastic-associated chemicals leached into microbeads.

Many cosmetics manufacturers already have, or are in the process of phasing out synthetic microbeads from rinse-off products such as shower gels, face washes and toothpastes. Governments, including those in the U.K. and U.S. are also acting to impose national bans on the use and/or manufacture of synthetic microbeads for these same product groups.  Environmental group Greenpeace called the U.K.’ government’s move to ban the sale and manufacture of microbeads in rinse-off products by the end of 20174 “the strongest ban on microbeads in the world to date5”

While legislation represents an important step in the drive to clear our oceans of harmful microplastics, the new laws only cover products that are designed to be washed or rinsed off and so end up down the drain. What they don’t address are products such as sunscreens, which are designed to stay on the skin. Removing synthetic microbeads from this type of cosmetic would, the manufacturers reportedly claim,6 require them to reformulate up to 90% of their products.

Beauty companies are nevertheless striving to meet the challenge of eliminating microbeads in their products, and many have sourced natural alternatives, such as sugar or salt, apricot kernels, cornmeal, pumice, silica, coffee grinds and walnut shells.

Scientists are also working to develop environmentally friendly alternatives to synthetic microbeads. A team at the University of Bath  in the U.K., for example, has developed a robust, continuous process for manufacturing safe completely biodegradable microbeads from one of nature’s most abundant, and eminently renewable resource, cellulose,7 which is the structural component found in trees and plants. 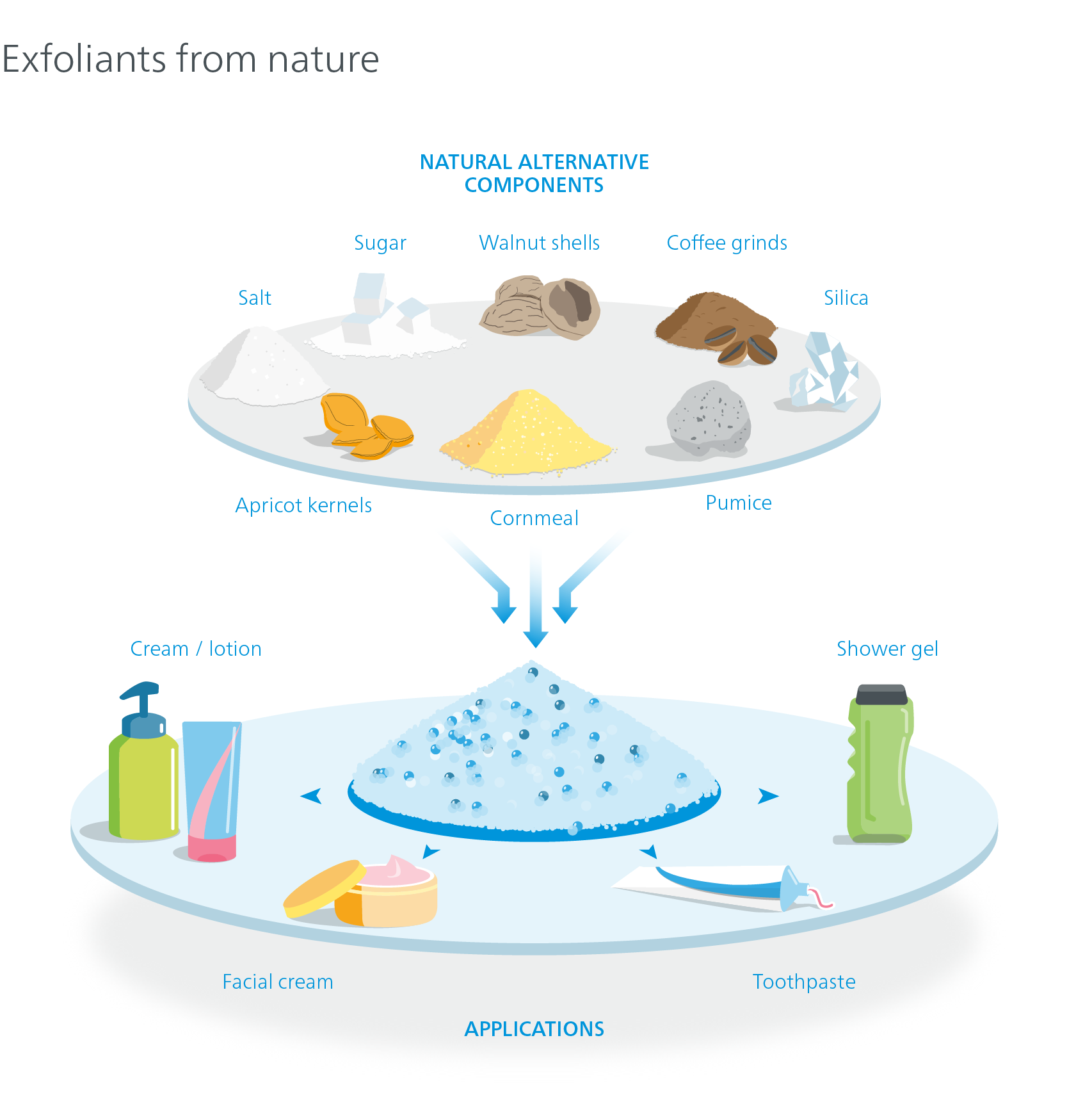 Developing the right technologies for the industry

GEA understands the industry’s need to produce the highest quality, innovative  products that contain natural ingredients. We have supported the personal care sector for decades, by providing processing solutions that ensure the safe, hygienic and reliable manufacture of soaps, creams, liquids and gels. “Natural ingredients are typically more easily damaged or degraded than synthetic polymers, and this can impact significantly on customers’ supply chain costs and product quality,” says Greg Gillaspy, Technology Manager for HPC Applications at GEA. “We engineer solutions that can handle the most sensitive naturally derived ingredients, delivering flexibility and versatility.”

GEA technologies allow customers to stay flexible, and reproducibly manufacture personal care products that contain particles of every size, composition and density, from crushed seeds in facial scrubs, to sugar crystals in body polishers. “The home and personal care sector is dynamic and innovative to meet fast-changing global trends, emerging behaviours and rapidly changing consumer expectations,” Greg adds. “At GEA we develop robust manufacturing systems that are versatile to meet the ever-changing needs of our customers’ processes.”

Mixing and cleaning are key stages in the manufacture of exfoliating skincare products. GEA has solutions for efficient homogenization, to ensure gentle handling of both the base component and the suspended particles, whatever the viscosity. Our BATCH FORMULA™ high shear batch mixer for tank-based batches, and DICON™ in-line blending system for continuous production ensure reliable, homogeneous mixing, whatever the ingredients, final composition and viscosity.

“GEA technologies and solutions give the industry the freedom to develop new and exciting products with natural ingredients, combined with the confidence to manage scarce resources, minimize waste, and deliver sustainable manufacturing solutions not just today, but for the future,” Greg concludes. 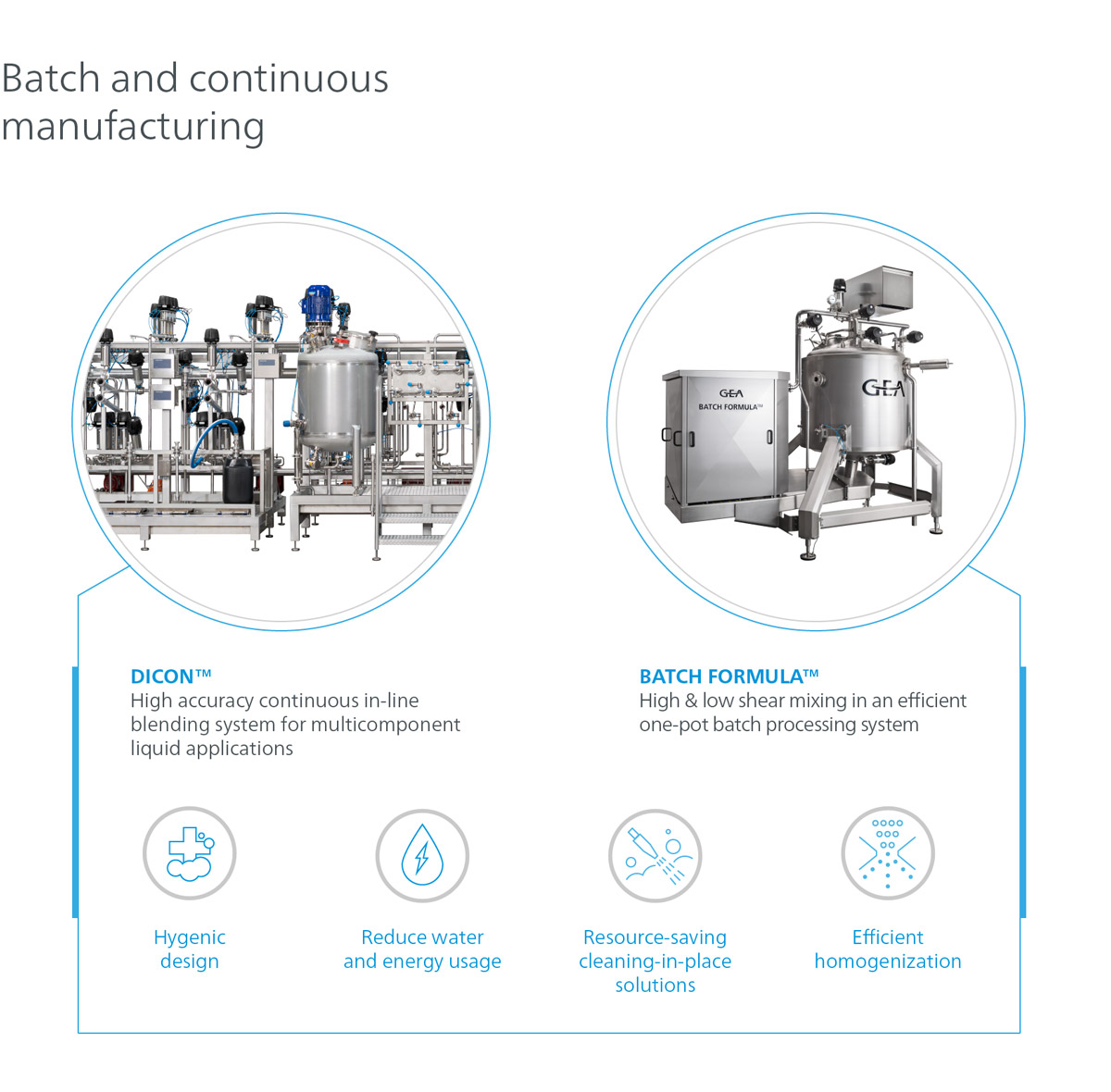 The processes used to manufacture personal care products present very specific challenges and require a particular set of skills. With many years of experience, GEA provides the most important deliverable in capital and scale-up projects: security of outcome. 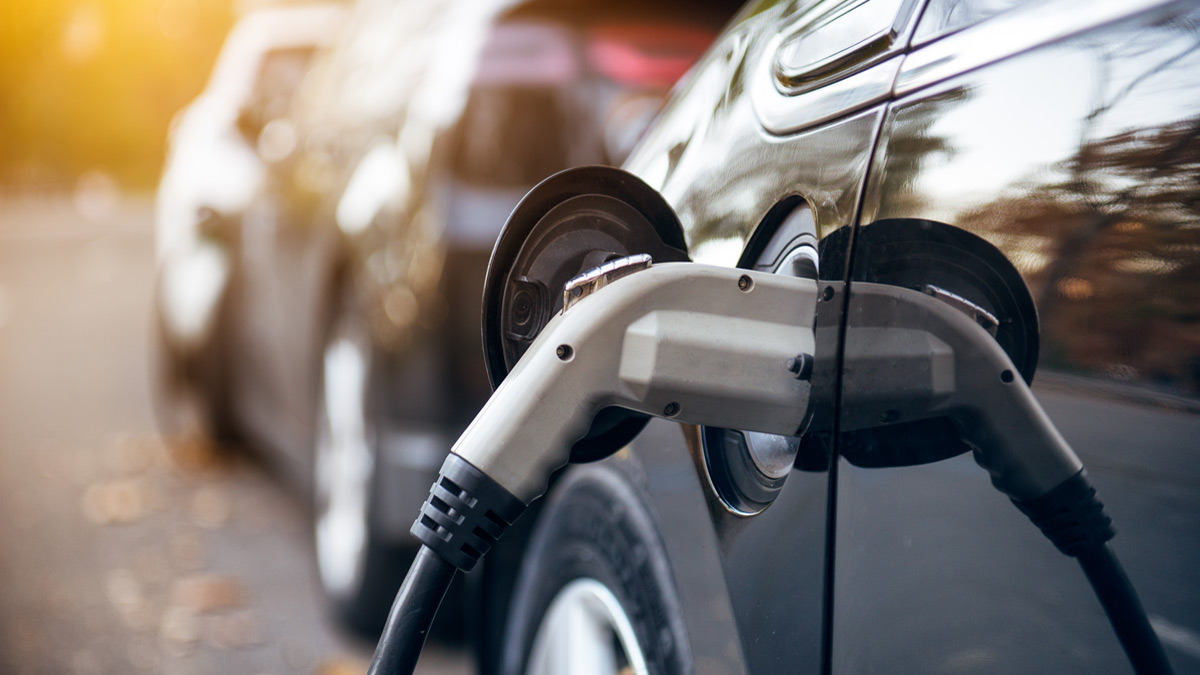