Keeping animals healthy and stress free is critical for livestock farming. Well fed and contented animals are more productive, and for dairy cows this means more milk per cow. 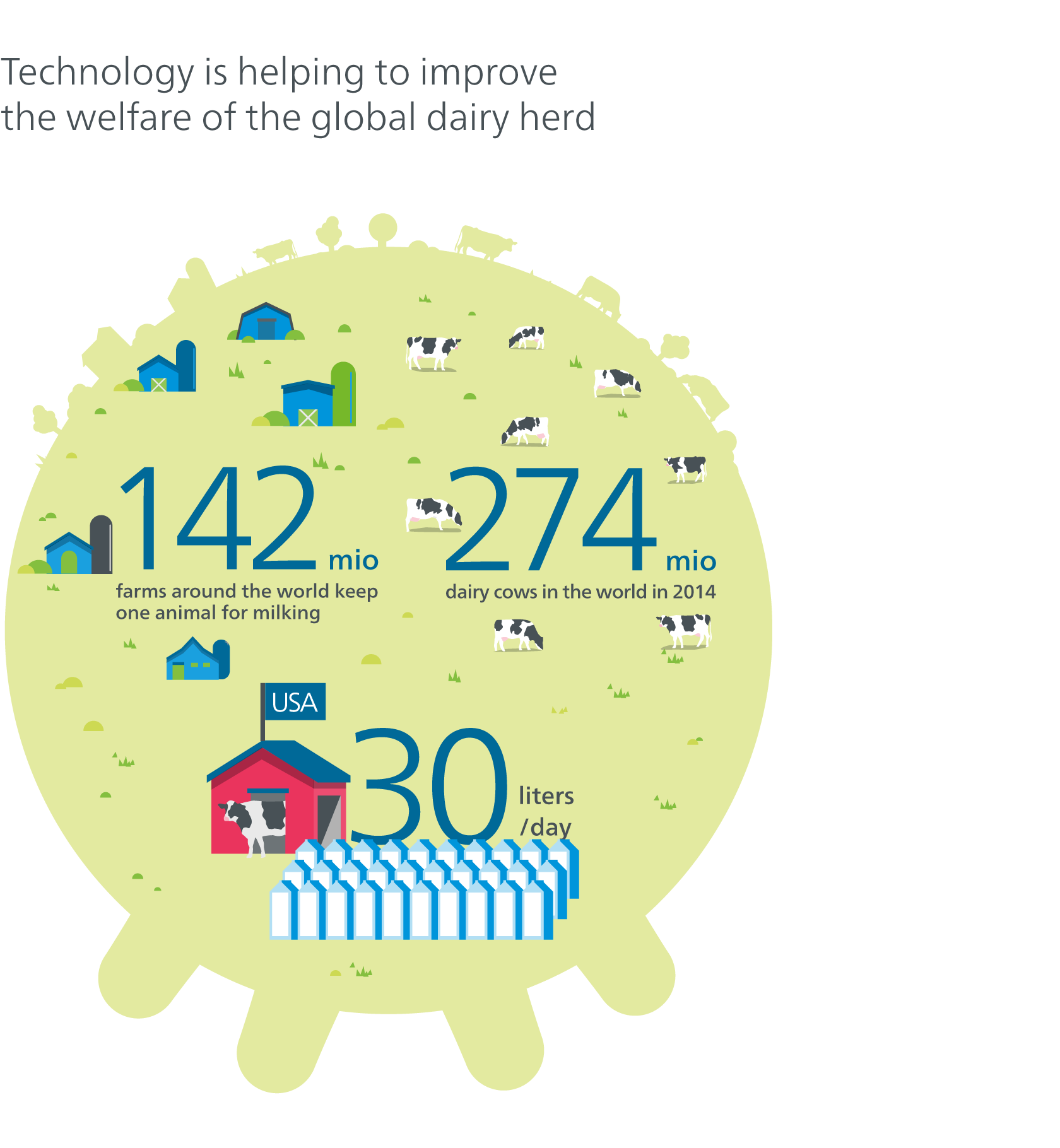 Milk is one of the world’s most valuable agricultural products. More than a quarter of the 570 million farms around the world keep at least one animal for milking, according to figures from the Food and Agriculture Organization (FAO) of the United Nations1. That added up to a global herd of about 274 million dairy cows in 2014. Selective breeding combined with factors such as improved animal welfare – including nutrition and housing –  means that milk production per cow has also roughly doubled in the last 40 years2. In the U.S. average milk production per cow now tops 30 litres per day.

However, even the most well looked after animals can become sick or injured. On small dairy farms the farmer or herdsman will likely recognize each animal’s natural behaviours, habits and eating patterns, and notice when something isn’t right. This level of observation represents the primary diagnostic tool for detecting initial signs of lameness, infection, or stress, for example. Early identification of common health issues such as mastitis or hoof problems means that they can be dealt with before the animals becomes more unwell and in greater discomfort. Quick diagnosis and remedial action also means faster recovery, less impact on productivity, reduced use of antibiotics and lower vets bills.

Relying on the farmer’s expert eye to monitor individual cows is becoming harder as farms get bigger. The automation of tasks such as milking and feeding means that farms may now include hundreds or thousands of animals. There is no way that a herdsman will recognize changes in the behaviour of each of potentially dozens of cows under his care.

In parallel with increases in farm sizes and intensive farming practices, consumers are becoming far more conscious of animal welfare issues, and are demanding assurance of food quality, safety and traceability, explains professor Joerg Hartung, at the University of Veterinary Medicine Hannover, Foundation (TiHo) in Germany.

"Consumers today are very well informed. Farmers must make an income, but at the same time keep their farms sustainable and their animals healthy, happy and productive. It's a hard balance to maintain."

Technology is a key enabling factor in farming welfare practices today. Automated milking machines record the daily quantity and quality of milk produced by each cow, which can represent a basic indicator of health. More recently, smart technologies have been developed that can unobtrusively monitor every animal’s behaviour, in real time, 24 hours a day, to provide even greater insights into health and wellbeing.

Application of these modern systems for animal management and welfare – collectively known as precision livestock farming, or PLF – is based on the use of non-invasive monitoring devices, such as cameras, microphones, wearable collars or leg bands, which detect changes in how animals behave out in the field and in their barns and sheds. The devices may measure and record the amount of time an animal spends walking, eating, standing or lying down.

The systems detect and interpret deviations from an animal’s normal behaviour, assess whether that behaviour may indicate a health problem, and automatically alert the farmer’s smartphone or computer. Importantly, PLF technologies don’t compare one animal with another, rather, they monitor each animal as an individual, over time. “We can derive a huge amount of insight into an animal’s health and general wellbeing by monitoring quite simple behaviours,” explains professor Daniel Berckmans, at the Katholieke Universiteit, Leuven, Belgium. “Appropriate PLF technologies can even detect when a cow is coming into oestrus, and so determine the best time for insemination. Measures of stress, such as aggression, for example, can alert the farmer that some aspect of the animals’ housing conditions may need modifying.”

Farmers are embracing PLF technologies not to replace hands-on husbandry, but to provide an extra layer of vigilance. “Round-the-clock monitoring provides an early-warning system, but it’s still the farmer who acts on that early warning, and who will have the experience to determine whether the animal is in discomfort, and if so, the possible cause and the next steps to take,” Professor Hartung stresses. “Farmers still need to have that interaction with their livestock, but 90% of those I have spoken with have been in favour of monitoring as a valuable tool that can help them to better understand their animals.”

The information that the devices record may be relatively simple, but the way that the data are presented and interpreted can give enormous insights into many aspects of wellbeing and fertility.  The farmer can use a smartphone, tablet or computer to log in to a web-based portal, and view all the results and statistics for each cow in a comprehensive easy-to-read, graphical format. Periods of particularly high activity, for example, can indicate the optimum time for insemination, while an unexpected drop in the amount of time spent walking or standing may indicate lameness.

The ability to carry out 24/7 monitoring can also give the farmer great peace of mind, professor Berckmans adds. “The key is not the ability to make big calculations, it is defining the right feature variables to measure in the first place,” he notes.  “Sometimes these can be quite simple, such as the depth or pitch of a pig’s cough,” professor Hartung adds.

“Computer algorithms can identify whether that cough was just an animal clearing its throat, or whether the cough was indicative of ill-health” 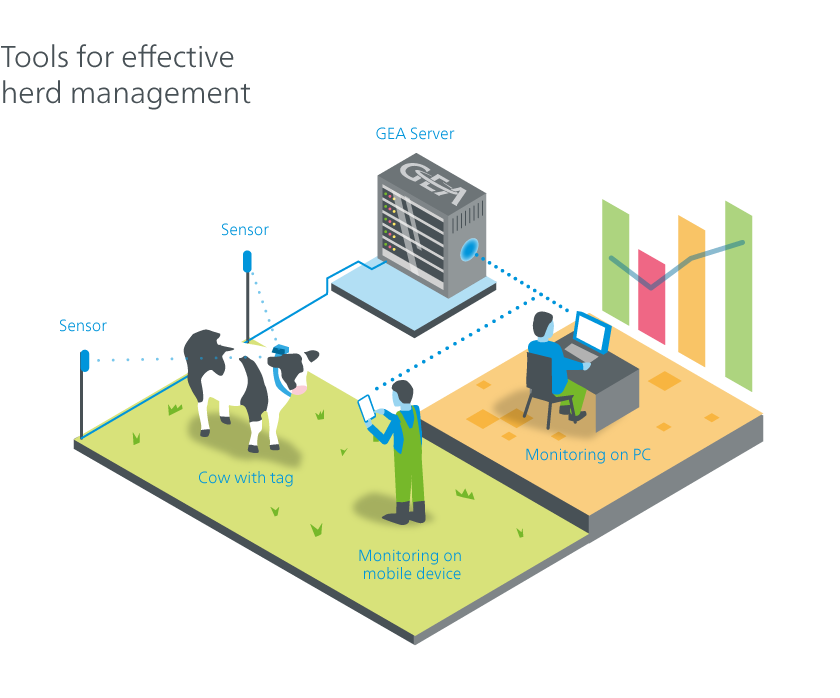 GEA is pioneering the development of PLF technologies for dairy farming, and has worked alongside academic researchers, including professors Hartung and Berckmans, as part of the EU-PLF project, which demonstrated the application of GEA’s CowView PLF system in real-world farm settings. Led by Daniel Berckmans, the EU-funded PLF initiative saw academic and industrial partners work together to help bring innovative PLF tools out of the lab and into dairy, pig and poultry farms.

CowView includes an indoor GPS system (RTLS= Real time locating system) that continually records the location of each cow using sensors in the barn that receive signals from CowView tags on the animals’ collars. The system provides a holistic view of herd wellbeing. Information received from the CowView sensors is analyzed to provide detailed data on animal-specific movement profiles, and the behaviour patterns of individual animals and animal groups, as indicators of stress or sickness. The system communicates alerts directly with herd managers, technicians and external service providers, and will even direct the responder to the exact position of an individual animal among perhaps thousands of animals in the barn.

Interest in PLF technologies is increasing apace around the world, and in particularly in South America and Asia, comments professor Berckmans. “There is huge growth in and intensification of livestock farming in these regions, and a keen realisation that effective management of animal welfare must go hand-in-hand with efficient production.  The application of PLF won’t just impact on the large, intensive farming setups, however. Even the more traditional, smaller farms can increase productivity using PLF technologies to monitor their livestock.”

GEA recognizes that it can play an important role in developing PLF technologies that will result in tangible benefits both for animal health and farm operation. “GEA has prioritized the development of state-of-the-art monitoring systems to derive even better insight into cow behaviour and wellbeing on dairy farms all around the world,” comments Dr. Susanne Klimpel, Head of Product Management for Applications & Components at GEA. “Our innovative systems will help farmers ensure the best welfare for their animals, but also improve the efficiency and productivity of their farms.”

GEA is one of the world’s leading solutions and system providers for livestock farming. From design and planning of barns to daily herd and farm management, we offer a total solutions package to help farmers manage their businesses efficiently and sustainably. GEA’s world-class farming technology portfolio includes animal feeding, barn equipment, manure management and the care of youngstock. Our planning specialists have completed many successful projects for cow, sheep, goat and buffalo herds worldwide, so farmers know they are in good hands with GEA