Situated in the famous beer region in northern France, in the Province of Artois near the Belgian border, there has been a brewery in the 330-people village of Bénifontaine for more than 90 years. This brewery has been successfully run by the Castelain family since 1966. The brewery is famous for its CH’TI lager, which won a gold medal at the Brussels Beer Challenge 2013 and a silver medal at the European Beer Star 2013 in Munich. Since the beginning of 2013, these award-winning beers have now been brewed in a brewhouse from GEA Brewery Systems.

GEA was pleased to take on the task of creating a new brewhouse for such famous French beers. The Castelain Brewery set a tight time frame and a clearly defined task for the conceptual design of the plant. The main focus was not only on meeting the latest technological requirements, but also on covering the international demand in the long term with a flexible plant system, particularly as this demand is forecast to increase continuously.

To meet this goal, the GEA COMPACT-STAR™ brewhouse was selected. The compact, modular, expandable brewhouse concept has a number of properties to optimize the process and quality.

This includes a 3-vessel brewhouse with a 5 t/h MILLSTAR™. The brewhouse was installed in a new building which was erected specifically for this purpose. On an area of 120 m², brews with an original gravity of 12° to 17° Plato are produced with the COMPACT-STAR™ with a cast-out quantity of 100 hl cold wort and a filling charge between 1.8 t and 2.3  t. The maximum capacity is 7 brews per day. 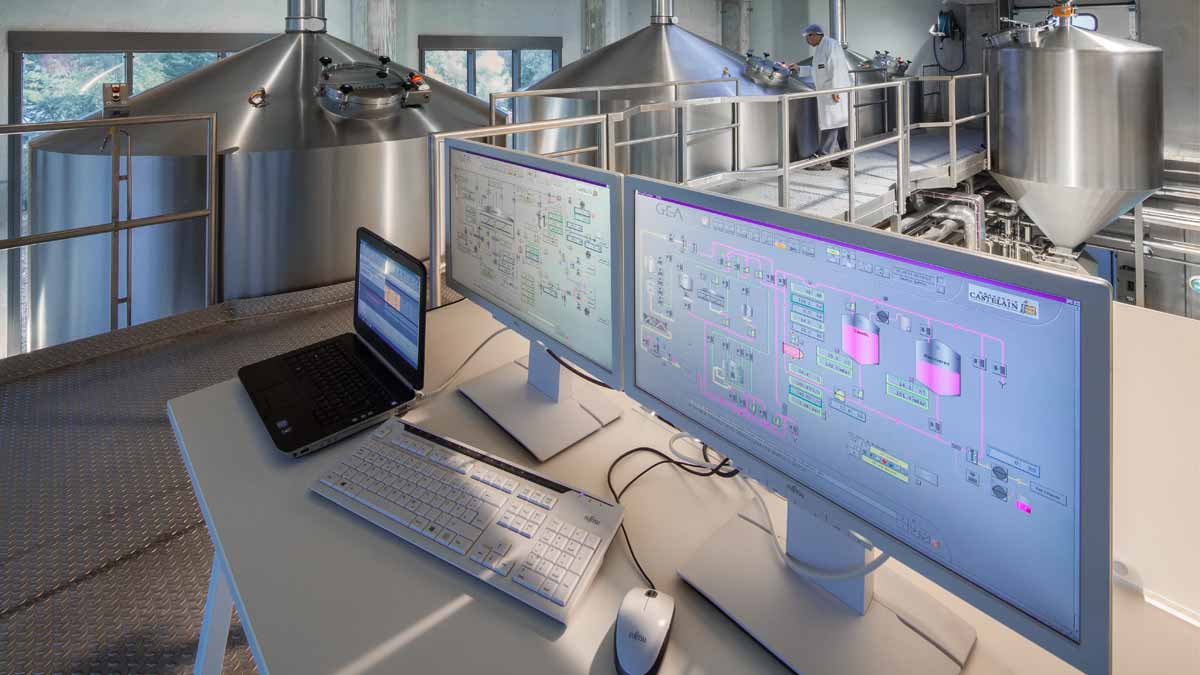 The MILLSTAR™ has a compact design and ensures steeping conditioning with little oxygen uptake. The mash is transferred into the mash vessel from below by a Mohno pump. The mashing process can be realized in two ways. The mash vessel is either heated with steam or warm water is added (infusion mashing). The lauter tun with a diameter of 4 meters has a lautering surface of 12.5 m² with a free filter area of 14 % and includes important features of the LAUTERSTAR™ technology like double-shoe knives and differential pressure measurement. The weak wort can be collected in an insulated tank and the warm weak wort can then be added to the MILLSTAR™ during the next brew. The Whirlpool/wort kettle is equipped with a JETSTAR™ internal boiler and is individually adjusted to the minimum and maximum cast-out quantity requested by the brewery.

Individual, efficient and with easy automation
Since the brewery produces both top-fermented and bottom-fermented beers, the cooling system is designed as a two-stage heat exchanger. The wort flows to the yeast dosing unit with the corresponding temperatures. With the GEA aeration units, the wort comes to the fermenting room with an oxygen content of up to 12 ppm.

As a specialist for process integration, GEA integrated some existing process units of Castelain Brewery into the new brewhouse. Thus, the entire system was raised to a uniform technical level and the production process was optimized. The GEARBOXX™ automation system is an open system based on ILTIS. It controls the new COMPACT-STAR™ brewhouse. For increased security, process monitoring is realized by two redundant servers. The administration of all recipes and of production and laboratory reports can be customized. Thanks to the intuitive operation, it was no problem to familiarize the production team as well as the laboratory staff and the management of Castelain Brewery with the GEARBOXX™ automation system. All production-relevant information can be stored over a period of 9 months and provides comprehensive control to the brewery management.

Fit for the future
The expandable COMPACT-STAR™ brewhouse system is part of the generation contract of Castelain Brewery. A possible extension of the system has already been taken into consideration. Corresponding structural, procedural and system-related precautions have been taken. Flexibility of the production equipment in response to a rising demand is thus ensured. With a 5-vessel brewhouse with a MILLSTAR™, a maximum plant utilization with 12 brews per day will be possible.
With the COMPACT-STAR™ from GEA Brewery Systems, the brewery in Bénifontaine now certainly has a technical and technological solution that is the best and safest basis for both the present and the next brewery generation.

Fit for the future

With a 5-vessel brewhouse with a MILLSTAR™, a maximum plant utilization with 12 brews per day will be possible. With the COMPACT-STAR™ from GEA, the brewery in Bénifontaine now certainly has a technical and technological solution that is the best and safest basis for both the present and the next brewery Generation.