Making a clear commitment to quality and sustainability, Sternquell has relocated its production activities from Dobenstraße to Plauen/Neuensalz. And, with a history of collaborating with the company – having previously installed a BRAUMAT™ process control system - GEA was called in to help.

The transition presented some hurdles, however. The Neuensalz location was classified as earthquake prone, meaning that the previously installed yeast assimilation equipment, pitching control system and the beer chiller all needed to be moved to create enough space for the new system and accommodate steel plates in the floor foundations. In addition, a significant amount of spatial rethinking was required to make the machinery fit into the new brewhouse.

“The placement of the vessels and the brewhouse equipment around the structural pillars and roof trusses had to be planned down to the centimeter,” noted GEA Sales Manager Matthias Schmidt. “The ceiling height in particular required a complete design and piping overhaul.” Only 2.5 m was available to host the drives and valves, compared with the regular height of 3–5 mand raising the roof was not an option!

Another key aspect the Sternquell brewery was the efficient use of raw materials and resources. “By bundling the production locations, we wanted to sustainably optimize the brewing process and eliminate the daily transport of beer and wort,” explains project manager Rüdiger Senf. Furthermore, to meet certain performance requirements (a solids content in the lauter wort of less than 100 mg/L and a boiling time of less than 60 minutes), GEA used tried-and-tested technology in the five-vessel brewhouse, such as the MILLSTAR™ quality automation unit. 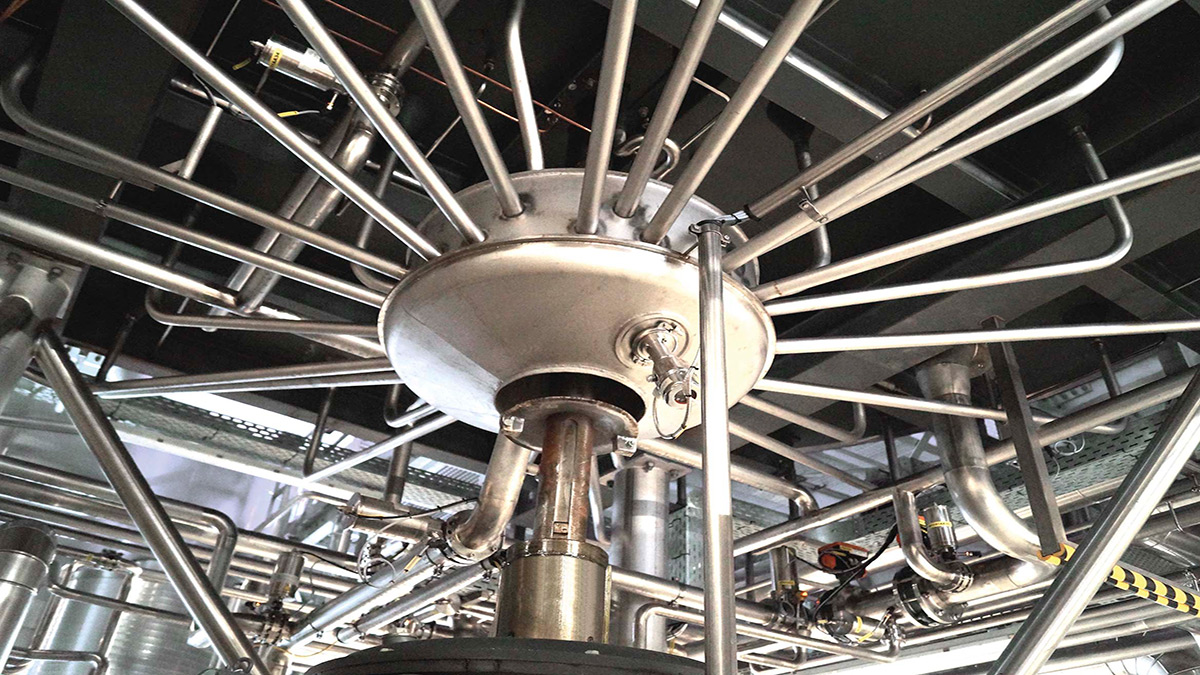 With the central lautering system, all lautering pipes are routed into a collector. This creates a clearer structure, is more functional and easier to clean.

Working to a tight schedule, the new brewhouse was installed and commissioned in a mere 5 months. The new malt silo plant has an intake capacity of 40 ton/h, has a storage capacity of nearly 200 tons and also includes malt cleaning along with conveyers and an aspiration system. During outdoor/indoor installation, GEA made sure to minimize the areas requiring explosion protection. In addition to the spatial adjustment, Sternquell also strove to create more efficient brewing processes and greater production flexibility. GEA thus installed LAUTERSTAR™ lauter tun technology to optimize the brewing process and implement shorter cycle times.

Similarly, JETSTAR™ equipment was installed to make the wort mixing step more homogenous and reduce the thermal load. The two-level wort spreader ensures the efficient extraction of volatile components and undesired odorous substances at low evaporation rates, resulting in a reduced thiobarituric acid index (TBI) and better tasting beer. Another JETSTAR™ advantage is increased flexibility, as the thermal conversion process and evaporation can be done independently. 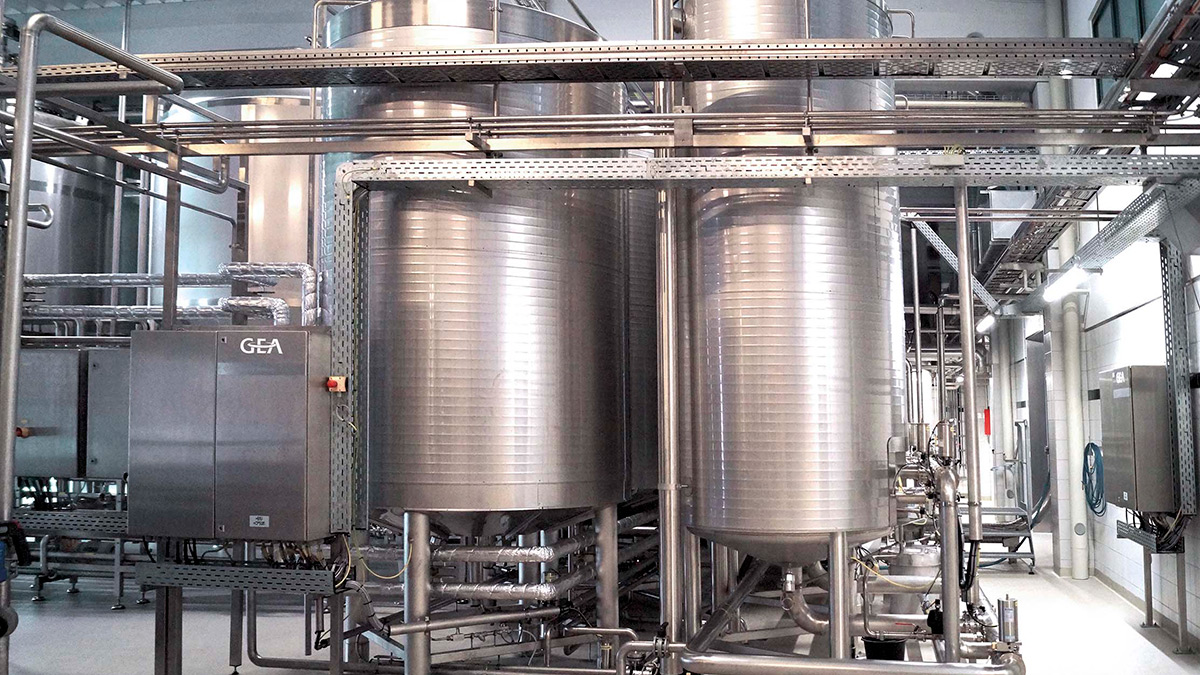 A new CIP/SIP system using customized cleaning programs was installed to meet the necessary hygiene requirements and, now, prior to adding yeast, a single-stage wort cooling system is used. By cooling to the pitching temperature in less than 50 minutes, all the heat in the wort is transferred back to the brewing process; and, depending on the required number of brews per day, the brew water can either be continuously cooled or when electricity prices are low. 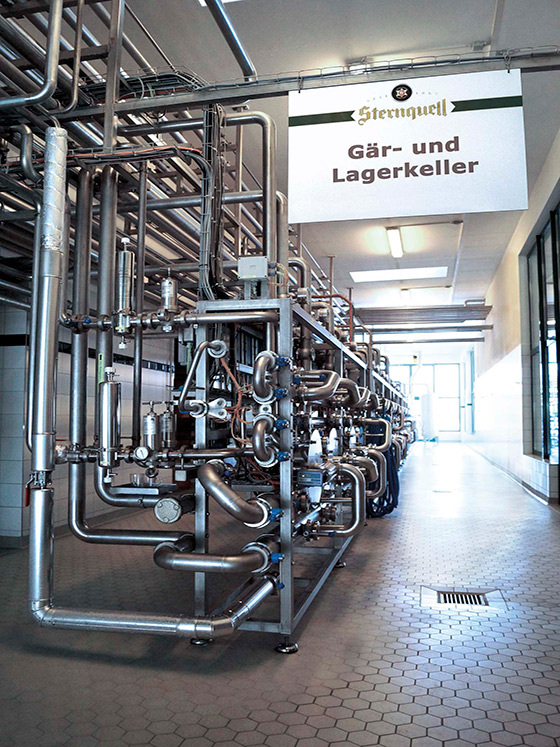 Parallel to commissioning, the operators began their 6-month training. “As usual, working with the latest technology requires both expertise and understanding,” said Rüdiger Senf when discussing the switch to the new technology. “However, I will always remember the operators’ excitement.” Commenting on the new brewhouse, Rüdiger adds: “The new processes are intuitive. Everything is much more comfortable and faster — particularly because of the expansion and installation of the BRAUMAT™ control system.”

All the process phases — in the brewhouse and cold block — are linked and optimized for fully automated brewing, resulting in a much shorter brew cycle. The new system was able to decrease the brew time with the same wort amount from 4 hours to 150 minutes.

During the joint evaluation of the process steps, GEA worked closely with Sternquell to make fine and final adjustments. “The co-operation was always solution oriented,” says Matthias Schmidt. “We supply systems technology; but, we’re in the business of forming long-term partnerships with our customers, including post-project advisory services.” To secure the future viability of the entire system, GEA has compiled an extensive service package, including maintenance, servicing and an agreement covering a consulting service for possible recipe changes.

Benefits in daily operations – a balance

The new brewhouse was officially launched in August 2016. At the time, Dr. Jörg Lehmann, Chief Technology Officer, Kulmbacher Group, and Managing Director of Sternquell brewery, commented: “After waiting so long, the employees are all together at a single location. The new, faster processes and working procedures have helped to increase motivation among our employees and improve internal communication.”

In summary, the new brewhouse has generated numerous positive effects. In addition to the economic aspects and the minimized infection risk by eliminating transport, Sternquell has made a firm commitment to environmental sustainability. “Environmental friendliness is a key component of the Sternquell brewery philosophy,” said Lehmann. “This includes both the efficient handling of natural resources, such as water and natural gas, but also the decision to identify potential savings and utilize them.” In conclusion, it was agreed that, based on GEA technology, the smart brewhouse engineering project is a shining example of high performance, efficiency and ecofriendly processing.

A Milestone in Lautering Efficiency

Maximum extract yields and efficient use of resources are important, but with the new LAUTERSTAR™ you will benefit in every way. The lautering time is reduced, flushing and cleaning times are minimized, operating and maintenance costs are lower than with ordinary systems. The LAUTERSTAR™ works so efficiently that the investment pays-off quickly to keep life-cycle costs down. The LAUTERSTAR™ - a milestone in lautering efficiency.