The need for the contained handling and processing of pharmaceuticals began to rise significantly about 15 years ago, based on an increased focus on health and safety and the development of highly potent active pharmaceutical ingredients (HPAPIs).

The response by pharmaceutical equipment suppliers has resulted in marked improvements in achievable containment levels, using both established solids-handling equipment and new, innovative techniques. The selection of suitable equipment, however, requires an in-depth understanding of certain aspects of containment: first, the chosen equipment must perform at the required level; and, from a financial point of view, expensive and unnecessary investment should be avoided.

The following article describes aspects such as product-specific exposure limits, equipment-related exposure values and, finally, the correlation between the two. Only when these aspects are brought together in the right way can we discuss a tailor-made containment solution.

What is containment and why do we need containment? Essentially, containment is the area separation from product to personnel/environment by a barrier. Containment is needed to prevent any negative impacts (contamination) being transferred from one area to the other and vice versa.

Personal protection is a key consideration. Human health cannot be compromised, which means that the first duty of every employer is to prevent the exposure of employees to substances hazardous to their health. However, in reality, exposure cannot be 100% prevented by equipment alone. Therefore, the employer must ensure — by using suitable equipment — that the real equipment exposure level is lower than a product-specific exposure limit.

The most common value used in the pharmaceutical industry to define a product-specific exposure limit, which an operator is allowed to be exposed to, is the Occupational Exposure Limit (OEL). A pharmaceutical working group calculates each OEL as soon as a new product is defined and categorized.

The basis for calculating the OEL is the No Observable Effect Level (NOEL). This value is determined by testing the new active pharmaceutical ingredient (API) on individuals. The daily dosage in mg of active/(kg bodyweight x day) is increased day by day until the first individual shows a reaction (lead effect). This NOEL is then multiplied by the average bodyweight of a human being to calculate the acceptable exposure amount for an operator. Considering that the operator will mainly absorb the airborne product by breathing, the previously calculated value is subsequently divided by the volume that human breathes per day. Some additional safety factors (SFx) allow for the seriousness of the initial reaction or the difference between human subjects and test animals.

This OEL now gives a value for the amount of airborne product particles in the working environment that an operator can be exposed to on a daily basis, for their entire life, without any risk to their health.

The real exposure levels of equipment can’t be calculated, but they can be determined by measurement. This is done using special air sampling methods; the amount of collected airborne particles is then determined by analysis. This amount is divided by the volume of air that passes through the air sampler during sampling, which gives a value in µg/m3. This value only represents an average exposure level for the specific sampling time, a time weighted average (TWA). Generally, the pharmaceutical industry works with two different TWAs: the Short Term Time Weighted Average (STTWA), based on a sampling time of 15 minutes; and the Long Term Time Weighted Average (LTTWA), based on a sampling time of 8 hours.

Until recently, no guide existed that described how to take these measurements. As such, a lot of varying exposure performance data was determined and published for certain containment equipment. The data were non-comparable and, often, not suitable for use in real pharmaceutical installations.

A guide, initiated by GEA and created by an international working group, is now published by the ISPE and is known as SMEPAC (Standardised Measurement of Equipment Particulate Airborne Concentration). This guide now defines the required test processes and parameters, and remains as close as possible to actual operating conditions. Data obtained by SMEPAC-based tests provide the Short Term Time Weighted Average (STTWA) for a 100% pure active material.

Interpretation of OEL and TWA Values

However, this does not necessarily mean that the data obtained during SMEPAC-based tests has to be lower than the OEL. As described above, the equipment exposure data given by SMEPAC provides the STTWA for a pure API. For certain applications, such as charging or discharging, equipment-related exposure only occurs during the docking, transfer and undocking process, which is generally considered to take less than 15 minutes.

The SMEPAC data shows the exact amount of exposure for these 15 minutes (during which one complete make and break cycle takes place. So, to calculate now a Long Term Time Weighted Average (LTTWA) based on a known Short Term Time Weighted Average (STTWA) for that equipment, we simply divide the STTWA by 32 (8 h = 32 x 15 minutes) and multiply by the actual number of cycles.

In addition, more and more pharmaceutical companies are also considering the dilution factor of the handled product. As the equipment exposure data given by SMEPAC is based on a test with a pure API, diluted material will only release an amount of active material that correlates with the dilution factor (assuming the active is released at the same rate). That means that the real LTTWA for a diluted material can be calculated as follows:

This calculated LTTWA is now lower or equal to the product-specific OEL. 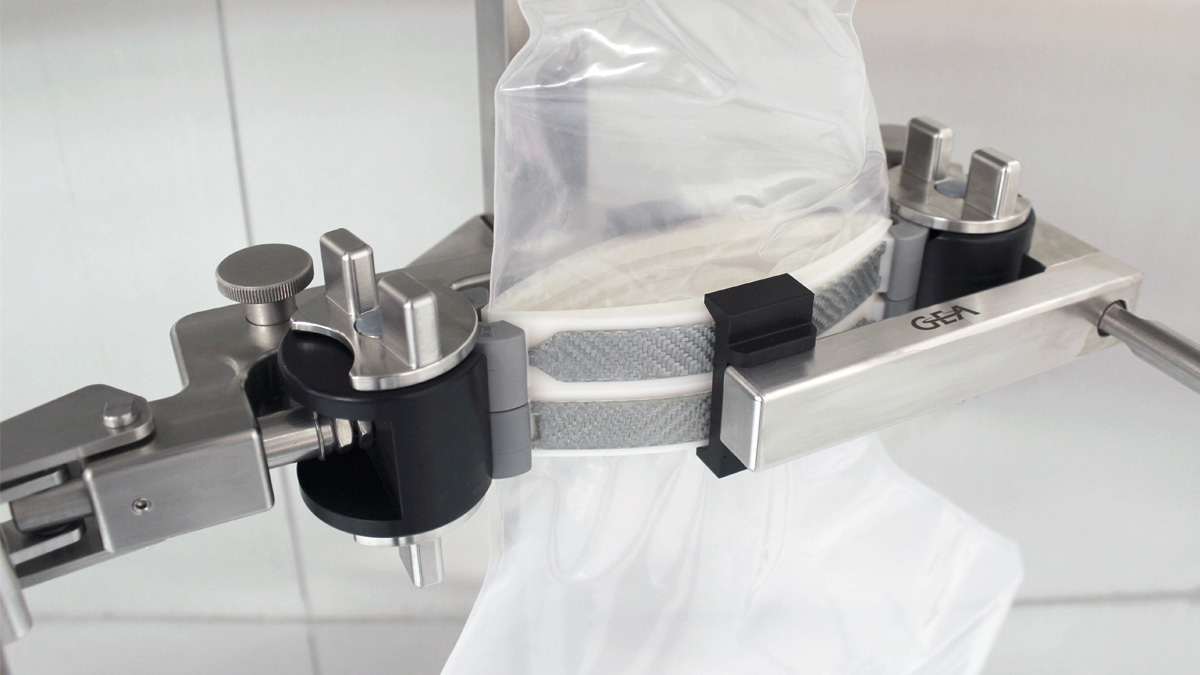 If the manufacturing process for a given product is defined, and the appropriate containment equipment has been selected, formula [4] can be used. By assuming that OEL = LTTWA, we can replace the LTTWA by the known OEL and calculate the required STTWA as follows:

For example, an operator works for a complete shift with a discharge station. The product is ethinyl estradiol, which has an OEL of 0.035 µg/m3, and there are eight cycles (makes and breaks) per shift. At this stage of the process, the material is already diluted to a concentration of 5% active. The required STTWA for a make and break connection for this process step is

For a SMEPAC-derived STTWA of 2.8 µg/m3, GEA would recommend the BUCK® MC Valve for this application (preferably with an additional extraction shroud to ensure better performance) or the use of disposable Hicoflex® technology. 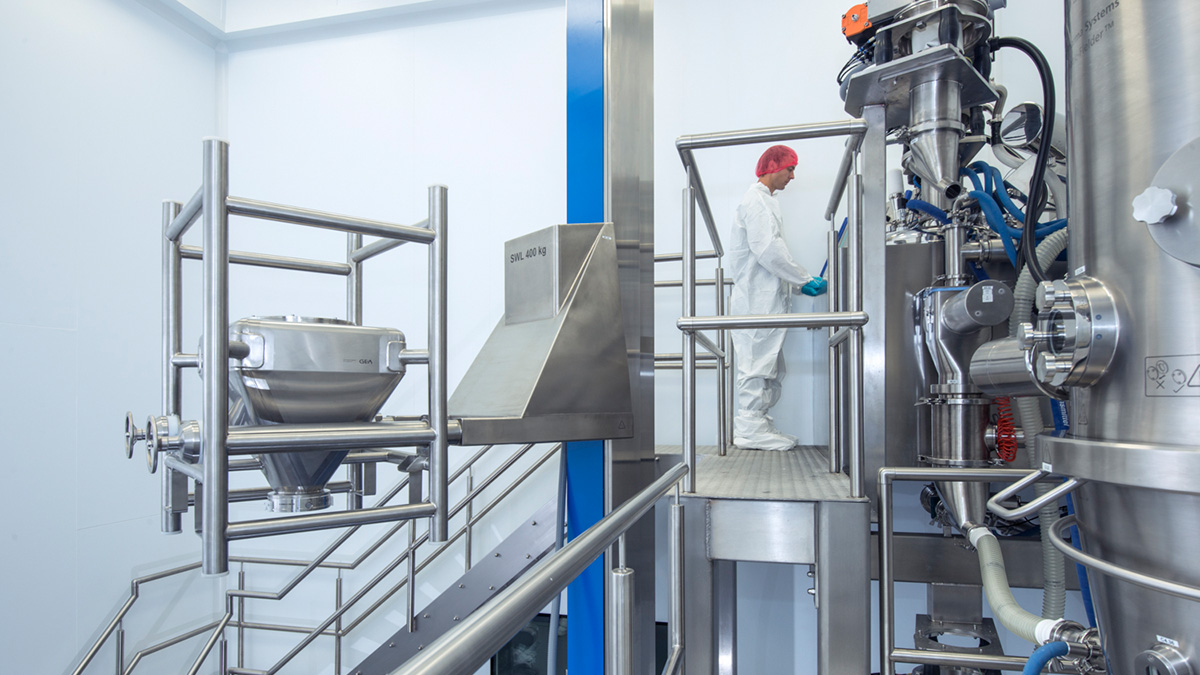 Compared with recently implemented installations, our current understanding of containment, as described above, means we can offer tailor-made solutions to the pharmaceutical industry, incorporating the use of containment interfaces with different levels of exposure performance at different points in a process line. Whereas in the early stages of formulation, when 100% pure actives are being processed, high performance and more expensive equipment will be required; during the final process steps (such as charging a tablet press), a more cost-effective and lower specification valve solution would be appropriate.

GEA has a long history of expertise and an unparalleled depth of experience in the field of containment. The company not only offers a comprehensive range of robust and compliant containment products, it also boasts unrivalled experience in identifying the most appropriate solution and a thorough understanding of containment risk analysis. We don’t just know about containment, we live and breathe it.