One of the most important and largest craft brewers in Chile, Cervecería Kross is considered to be one of the pioneers of the national craft beer scene. “When I first met José Tomas 14 years ago, in 2003,” says Asbjorn Gerlach, one of the company’s founders, “we never imagined that what first started as a few shared pints and a passion for beer would develop into something of this magnitude.” Co-founder José Tomás Infante adds: “We quickly realized that we had a similar business vision … but also knew that we’d need some help.” To get things started, the two entrepreneurs invited friends Carlos Prochelle and Rodrigo Infante aboard and set out on the adventure of turning the craft beer landscape in Chile — light-heartedly described as a desert — into a thriving business.

Fast-forward to 2011 and the brewery is regularly winning awards for its beers at, for example, the Copa Cervezas de America. And, looking to the future and wanting to capitalize on their reputation as one of the most widely recognized brands in the industry, the team decided to expand their production capacity to meet growing demand. “This is when we contacted GEA,” says Frank Seifert, brewmaster: “We wanted to work with a company that could make our dream come true.”

Until then, the company had been operating with a relatively small (25 hL) brewhouse. To scale-up production and after constructive discussions with GEA, a 100 hL brewhouse was ordered in 2012, which was to be installed in an existing plant as a structural extension in Curacavi (a small town between Chile’s capital, Santiago de Chile, and the coast).

In collaboration with an investor and well-known partner, one of Chile's largest wine producers, the next step was the purchase of a 100 hL COMPACT-STAR® Craft Brewhouse, composed of three vessels for a capacity of five batches per day (500 hL daily).

To say that eco-friendly brewing is a priority for Cerveceria Kross is a monumental understatement. It’s synonymous with the meteoric rise of the company’s craft beer. At GEA, the design philosophy is no different and the COMPACT-STAR® brewhouse has many features to prove it.

The COMPACT-STAR® wort kettle features the patented JETSTAR® internal boiler. By using a “smart” process, the JETSTAR® can reduce boiling times and significantly lower energy consumption. And, with two phase boiling, the JETSTAR® enables the brewer to apply a gentler, more homogenous heat treatment to the wort for the majority of the boil time. “Simmer” boiling improves trub separation and increases overall wort quality while using much less steam. A win, win, win!

Subsequently, a much shorter evaporative boiling phase is required to remove any unwanted volatiles. The JETSTAR® utilizes a unique thermo-siphon design with a multilevel wort spreader to do this both quickly and effectively. It’s all about reducing the brewery’s carbon footprint and gas emissions.

Other features of the COMPACT-STAR® include lautering to improve extract yields (better than 98%). By capturing so much of the extract, sewer BOD levels are almost negligible and, in addition, you can make more beer with less malt. Furthermore, a balanced wort cooling system is instrumental in energy savings. By making up just the right amount of hot brewing water as the wort is cooled and transferred to the cellar, virtually no steam is required! Because of this, water usage in a COMPACT-STAR® brewhouse has been shown to be as low as 1.3 hL for every hL of wort produced. Again, it’s been designed to use only those natural resources that are necessary … and no more!

Despite some bureaucratic obstacles that had to be overcome, the ambitious project and installation has now been completed. Having also installed a GEA centrifuge in January 2020, the company’s current capacity is four batches a day, which can be expanded to 10 per day in the future. “This is the first time we’ve installed and commissioned a GEA COMPACT-STAR® Craft Brewhouse in Chile,” said GEA’s Erik Löschner, Project Manager, “and we’re delighted with the result. Cervecería Kross is one of the biggest and most recognized craft beer brands in the country and it’s been a privilege to help them to continue their upward journey.”

Today, the brewery owns three taprooms in Santiago and another within the brewery itself. “We always have growth in mind,” added Asbjorn Gerlach, “and certainly hope to retain and expand on our current position as a supplier of high-quality craft beers to both the local market and beyond. 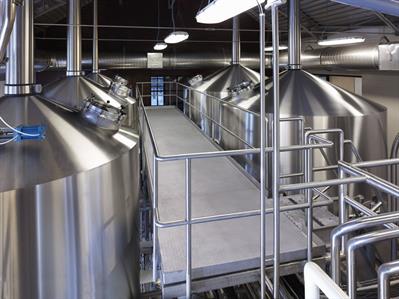 With a choice of 2-, 3-, 4- and 5-vessel brewhouse configuration, as well as a customized vessel combination, the GEA COMPACT-STAR® represents a fully flexible brewhouse design with eco-friendly wort production and low evaporation rates.